Se7en to start his military service

Se7en to start his military service 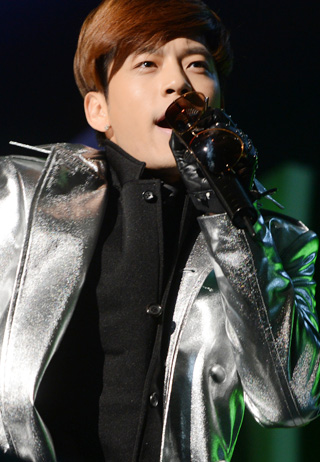 Se7en’s D-Day is March 19. The singer, whose real name is Choi Dong-wook, said on Saturday that that’s the day he’ll be starting his military service.

He made the announcement during a farewell concert at the Seoul KyoYuk MunHwa HoeKwan Theater in Yangjae, Seocho in southern Seoul, which also marked the 10th anniversary of the 28-year-old’s debut.

“Over the past 10 years, I’ve spent a happy and enjoyable time with the love of my fans,” Se7en said during the concert, according to his agency YG Entertainment. “I will begin serving my military duty this month,” he said. “I’m happy that I could have an opportunity to say goodbye to you before I join up.”

Nearly half of the audience was made up of Japanese fans, his agents said, even though Se7en held a farewell concert in Japan last month.

He added that he wants to continue his singing career after completing his 21-month military service.

“It might not be appropriate, though, if my name is still Se7en when I’m 50,” he said, getting some laughs from the crowd, his agents said.