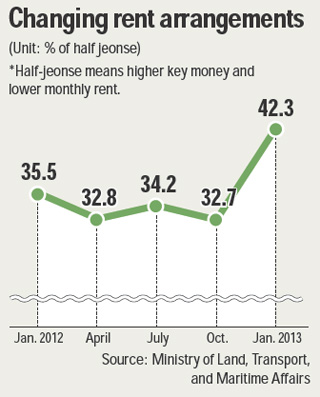 When Kim Mi-young, a 36-year-old homemaker, and her family recently moved into a new apartment in Gangdong District, eastern Seoul, she chose to pay the apartment owner monthly rent along with a low deposit instead of handing over a large lump-sum deposit, known as jeonse. Kim paid a 100 million won ($92,200) deposit before she moved into her 59-square-meter (635-square-foot) apartment and pays 700,000 won in monthly rent.

At first, however, the apartment was for jeonse requiring 220 million won as key money, but Kim had asked the owner if she could change the arrangement. It wasn’t because she didn’t have enough to pay the key money, but out of concern that the purchase price could fall and eventually the apartment would be put up for auction in the event the owner wasn’t able to return the key money.

“Though paying monthly rent is a big burden for us, I was afraid I wouldn’t be able to receive my key money back if the apartment is handed over for auction,” she said. “I decided to pay a lower deposit.”

Like Kim, there are growing numbers of Korean tenants living on half-jeonse, which requires lower key money but higher monthly rent, instead of jeonse, which requires only high key money. The trend is due to growing fear that with rising jeonse costs and falling prices of apartments, tenants might not be able to receive large sums of key money that had paid for jeonse. The increase in half-jeonse arrangements is triggering concern that ordinary households will be burdened by monthly rents.

According to the Seoul Metropolitan Government, in January and February a total of 56,389 lease arrangements were made. Of them, 35.4 percent were in the form of deposit plus monthly rent instead of jeonse, up from 29.7 percent in the same period last year. In Korea, there are hardly any lease arrangements where tenants pay only monthly rent. Instead, they are required to either pay a low deposit and monthly rent or a high deposit that normally is held for two years.

According to data provided by the Ministry of Land, Transport and Maritime Affairs, 42.3 percent of all lease arrangements in January were half-jeonse, up from 35.5 percent in January 2012. Half-jeonses are popular among tenants because with the falling housing prices and rising jeonse price, there is no way to secure a high jeonse deposit if an apartment is put up for auction, tenants are worried that they will not be able to receive back all their key money because there’s no price difference between the auction price and the key money.

According to Real Estate Taein, an auction information site, of the 13,694 apartments in the Seoul metropolitan areas last year that were put up for auction, 42.4 percent of leaseholders were not able to get back their key money.

“There are many tenants who fear the apartment they are living in will go up for auction,” said Choi Young-soon, a licensed real estate agent in northern Seoul. “Many tenants avoid living on jeonse, especially if they have to take out loans from banks.”

When apartment owners re-sign contracts with their tenants after a two-year period, they request that their tenants cover up the increased jeonse price by changing the lease arrangement into a half-jeonse system.

Concerns, however, are rising that household spending for tenants living on half-jeonse will significantly rise.

“Though I’m not worried about not being able to receive my key money if I had to live on jeonse, it’s a burden to pay rent every month,” said Park Kyung-ho, a 43-year-old company worker. “I will just have to tighten my purse strings.”

With half-jeonse arrangements on the rise, those who are looking for jeonse are having a hard time finding apartments. Of the 10 apartments for lease in the Jamsil area in the first half of last year, seven to eight of them were on jeonse. At present, however, there are only half.

Experts note that there should be government measures that respond to the changes in lease arrangements.

“It’s time for the government to bring out policy measures such as tax exemption benefits for tenants living on half-jeonse,” said Roh Hee-soon, a researcher at the Korea Housing Institute.