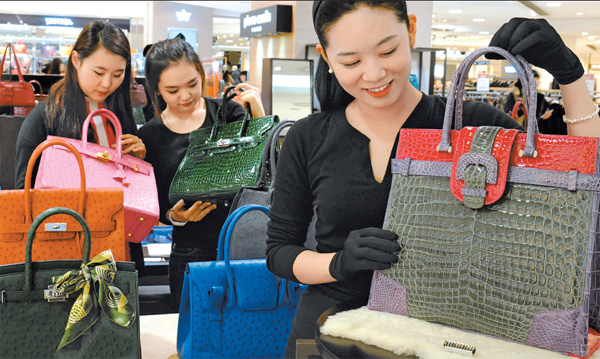 A sales clerk displays up a handbag made of alligator skin at a Lotte Department Store in Busan selling for more than 10 million won (9,219 dollar). Today’s luxury consumers are more concerned about uniqueness. Provided by the company

Lim, a 32-year-old female office worker who is getting married soon, has singled out a Saint Laurent handbag as a wedding gift from her bridegroom.

Its design is simple, with a Y-shaped buckle and no decoration.

“Chanel is expensive, but also too common. Louis Vuitton is even more prevalent,” said Lim.

Last year, she purchased a Givenchy handbag through a foreign brand Web site. It also has just a small print logo, which can be only seen by looking closely.

“Those of my friends who are really interested in fashion look for luxury brands that no one has ever heard of at select shops and online. Most people cannot even recognize them,” said Lim. “When someone has a bag that everyone recognizes even from afar, it makes me think that he or she is carrying the bag to boast about it. It just looks unsophisticated.”

According to last year’s sales, domestic clothing brand Spectator was ranked third in apparel sales, beating out well-known imported brands such as Alexander McQueen and Balenciaga.

It does not end there. Local brand Jardin de Chouette is so popular at high-end select shops that it launched a sub-brand Lucky Chouette last year.

At the luxury Galleria Department Store in Apgujeong, Gangnam, local brand Juun.J was the No. 1 seller of men’s coats.

“As luxury consumption becomes diversified, the number of customers quibbling over the brands’ nationality and history has declined a lot,” said a marketing director at a large high-end shop.

“Not only the local brands, but also those brands from Japan and developing countries can do well here as long as their design and quality are good enough.”

Breaking away from the uniform and consistent trend in?luxury brands, consumers are enjoying the current?style of neo-luxury, mainly consisting of emerging local brands.

It was the 1990s when the not-so-wealthy public began to eye luxury brands. Since then, a handful of brands such as Louis Vuitton, Chanel and Gucci monopolized the market.

However, old luxury brands are on the decline and the trend is toward more reasonable and practical spending on more obscure brands.

The luxury market, once unreachable for local fashion brands, now includes domestic brands that prioritize design, quality and value for money. It is dubbed “Luxury Market 3.0.”

It is a market led by consumers in their late 20s to mid-30s lead this market, exemplified by Scandimoms, referring to mothers in their 30s with Nordic lifestyle values, said Kim Nan-do, consumer studies professor at Seoul National University.

The number of Scandimoms is increasing significantly in Korea and it has been buzzword for 2013.

“They don’t feel guilty about consumption as they were born in a period of high growth. They grew up wearing Nike sneakers and Nautica jumpers,” said Kim. “They know which brands are valuable and know how much they should pay for certain brands. These people emphasize affordable luxury for themselves as much as they do for their children.”

The young consumers pursuing rational consumption are known inside the retail industry as the third generation of luxury popularization.

“The middle-aged consumers who started learning about luxury brands with masstige [mass prestige] brands such as MCM are the first generation. Those in their late 30s to early 40s who entered the luxury market by purchasing Louis Vuitton are the second generation,” said Jang Hye-jin, public relations manager at Shinsegae Department Store. “However, the third generation of young consumers does not blindly worship the existing luxury brands.”

Kim also separates today’s generation and those of the early days of Korea’s luxury market.

“The early generation could be seen as parvenu [socioeconomic newcomers]. This group includes those who suddenly made a lot of money from real estate after living their lives not knowing about the consumption,” he said. “As they hadn’t been spending their money, they know only a few luxury brands. These people blindly sought Chanel and Louis Vuitton.”

Kim cited the popularity of Louis Vuitton’s Speedy Bag, once called the “three-second bag” as they were seen every three seconds when walking on the streets.

Even during the recent downturn of the luxury market, these brands grew significantly at department stores and are dubbed the contemporary luxury.

The designs of these brands are simple, colors and sizes relatively diverse, and their logos discrete.

Some brands being sold too much as luxury sales at department stores since 2008 seem to have sparked a backlash, Kim explained.

“Bags bombarded with large logos are mostly out of the front at the stores. Chanel does not even display classic bags and only takes out when customers want to see them,” he said, adding that it shows how traditional luxury brands are struggling to change their image.

The most important feature of third-generation luxury consumers is self-awareness. If luxury consumers used to flaunt their wealth, young consumers with the attitude that it does not matter if others don’t recognize the brands have become the market’s mainstream.

This explains the recent boom of select shops with collections of various small luxury brands.

Since the late 2000s, dozens of select shops mushroomed around the wealthy areas of Sinsa-dong and Cheongdam-dong and Gangnam, southern Seoul.

Lotte and Hyundai department stores are quickly increasing the number of their imported clothing select shops.

At these shops, there are many Shinjin designers’ brands from Dongdaemun less than 10 years since their launch.

Nationalities of luxury brands at these shops are also diverse, unlike the traditional luxury brands that came mainly from Europe.

“Consumers who used to prefer brands over products now have strong propensity to consume reasonably considering the design, quality and value for money,” said Spectator’s designer An Te-ok. “On one hand, they tend to have pride in knowing the brands that others don’t know.”

“As the popularization of the luxury market continues, most middle-class women in their 30s have one or two luxury bags,” said Ryu Min-jung, a buyer of imported clothes at Hyundai Department Store. “As the kinds and prices of imported clothing diversify, consumers’ desire to express themselves with luxury clothes and jewelry is strong.”

In Luxury Market 3.0, distribution of brand information is also different. Third generation luxury consumers learn about what celebrities wear and carry in real time through local and foreign blogs.

The recent slump in sales at local department stores is also due in part to these changes in the pattern of luxury consumption, experts say.

“Last year, sales of luxury brands such as Prada and Saint Laurent significantly went up, but those of Gucci fell and those of Louis Vuitton were stagnant,” said a department store buyer. “It seems that the status of famous luxury brands is declining as the channels diversified, rather than consumers with financial difficulties cutting their spending on luxury goods.”

Instead, there are an increasing number of consumers who visit not only select shops, but also online foreign brand sites and luxury brand outlets that have expanded for the past three to four years.

“Even by including tariffs, when we import directly from overseas, products are about 30 percent cheaper than they are at department stores,” said Cho Jae-hyung, an employee at GS HomeShopping.

Some market analysts say diversification of the luxury brand market came as the extreme upper class continued to differentiate themselves from the public, looking for new and unfamiliar brands that most people cannot afford.

“The upper class constantly keeps its distance from the public,” said Chun Mi-young, research fellow at Seoul National University Trends Research Institute. “The one thing we know for sure is that luxury consumption is maturing with the trend emphasizing individuality and rationality.”