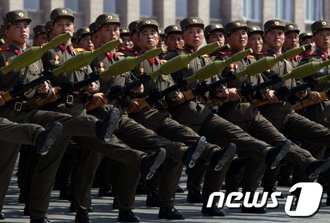 After days of increasingly bellicose threats from North Korea, a large joint military exercise between Seoul and Washington will start today.

The South Korea-U.S. annual war games, called Key Resolve, will continue through March 21. Roughly 10,000 South Korean troops and 3,500 U.S. soldiers will take part in the exercises, along with some high-end U.S. aircraft and submarines.

The drill practices the swift reinforcement of U.S. troops to the peninsula in case of an emergency like an outbreak of war with the North.

This year the drill will be led by South Korea’s Joint Chiefs of Staff in preparation for the transfer of U.S. operational control to South Korea, scheduled in 2015. Previous Key Resolve exercises were led by the Korea -U.S. Combined Forces Command.

The exercises are expected to utilize cutting-edge weapons and systems. The USS George Washington, an American nuclear-powered supercarrier, will join. It’s possible the drills will involve F-22s, the most advanced stealth fighter in the United States.

South Korea and the U.S. have already begun practicing the deployment of U.S. troops in the Foal Eagle exercise that started on March 1 and will run through April 30.

The exercises have angered North Korea and elicited a series of military and diplomatic threats. Kim Yong-chol, a North Korean four-star general, said Tuesday in a televised announcement that the regime “will entirely nullify the effectiveness of the Korean Armistice Agreement, starting from March 11,” the start of the Key Resolve exercises. Pyongyang also threatened to make nuclear attacks on Seoul and the U.S., cut off a hotline in the truce village of Panmunjom and abandon the “nonaggression agreement” between the two Koreas.

North Korea’s Foreign Ministry issued a statement Saturday reiterating its protest of stiffened sanctions by the United Nations Security Council that were passed last week in response to the regime’s third nuclear test.

“From now on, the world will clearly see how our status as a nuclear-armed and satellite-launching nation will become permanent,” the statement read.

A South Korean military official told the JoongAng Sunday that the North’s military appears to have readied 900 artillery guns for use.

Over the weekend, South Korean President Park Geun-hye was kept up to date on the situation by her yet to be appointed nominees to various ministerial positions. She was reported to be in touch with them around the clock.

Park will formally appoint 13 of her 17 cabinet members today, which will enable her to convene her first cabinet meeting.

“If there are more signals detected of provocations by Pyongyang, the National Security Council will definitely be convened, attended by concerned ministers,” a Blue House official told the JoongAng Ilbo. “The president will be able to lead the council in the underground bunker of the Blue House.”

The Presidential Security Service has beefed up security against terrorist attacks on the Blue House “by mobilizing both military and police forces,” an official from the service told the JoongAng Ilbo.

Despite escalating tensions on the Korean Peninsula, the Kaesong Industrial Complex operated normally on Saturday, according to the Ministry of Unification. According to the ministry, a total of 261 South Korean workers entered the Kaesong complex Saturday morning, and 409 returned to the South later that day.

Despite the tense situation, North Korean leader Kim Jong-un visited an indoor basketball court in Pyongyang, the ruling Workers’ Party’s Rodong Sinmun reported, although the exact date of the visit wasn’t specified. Just two days after the newspaper reported his visit to a front-line military unit off the west coast, it printed a photo of Kim at the basketball stadium in the Sports Village on Chongchun(youth) Street, Pyongyang.

Standing with high-ranking officials including his uncle Jang Song-thaek, he ordered officials to renovate the complex, the newspaper said. The newspaper printed another photo of Kim on the same day as he visited a team of archers. The date of that visit was also not specified.