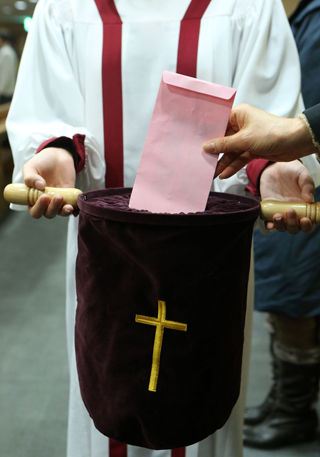 Religious donations and payments to charity are not safe from taxation anymore under controversial new restrictions on tax exemptions.

Last year, he donated the same amount, and it was exempt from taxation. But this year, he will be taxed on that 10 million won because the tuitions he pays for his two college-aged kids will use up his exemption.

“The tax law can be seen as a type of religious suppression,” Lee said.

Due to a revision in the Restriction of Tax Reduction and Exemption Act, starting from January, total tax deductions in seven areas, including education, insurance, medical fees and donations, were capped at 25 million won. The revised law is currently in the process of review in the National Assembly due to public backlash.

So a stockbroker at an international firm who earns an annual income of 265 million won can give 24 million won in church donations and another 15 million to a foundation to help the disabled. Under the new law, most of his donation to the foundation is not tax-free anymore.

A minister of a large church in Gyeonggi said, “A larger than expected number of believers may decrease their offerings.”

“But this will also impact those who do not necessarily offer large sums,” said an accountant of another large-scale church, the Yeouido Full Gospel Church, since the churchgoers have to also take into consideration deductions from tuitions and medical fees.

According to a survey conducted by the JoongAng Ilbo of 57 churchgoers at a large church in Gangnam, southern Seoul, nearly 32 percent responded that they donated less than 10 million won a year. Some 30 percent of those surveyed said they donated from 10 to 20 million won.

The surveyed individuals were mostly affluent, executives or employed at top conglomerates. Some 23 percent donated more than 30 million won.

Nearly 37 percent of respondents stated that the revised tax deduction law will have an impact on their donations, while 57 percent said it would not. The rest did not respond.

Many religious people are not aware of the change in the tax law and may not find out till they calculate their taxes for 2013 at the beginning of next year.

Park Jong-hwa, minister at the Kyungdong Presbyterian Church in central Seoul, said, “The reason why offerings are included in tax exemption benefits is because the money is used for the welfare of society, but the government seems to have overlooked that point.”

Buddhist sects had a similar reaction. Venerable Jugyeong of the Jogye Order of Korean Buddhism, the country’s largest Buddhist sect, said, “As the economic scale becomes larger, taxes have to be regulated with fixed tax rates; the method used this time is not right, where there are restrictions imposed on deductions.”

Son Bong-ho, a 75-year-old professor emeritus of Seoul National University and head of Sharing Korea, an umbrella organization of 150 charities including World Vision and the Korean Red Cross, said, “Currently, there is more interest in giving in society. In that sort of atmosphere, the new tax code is like throwing cold water on the donation culture.”

He added, “Koreans donate less than other developed nations. Instead, corporations donate a lot. This is not desirable because individuals should be encouraged to actively donate. A considerable amount of religious donations through church volunteer activities end up returned to society.”