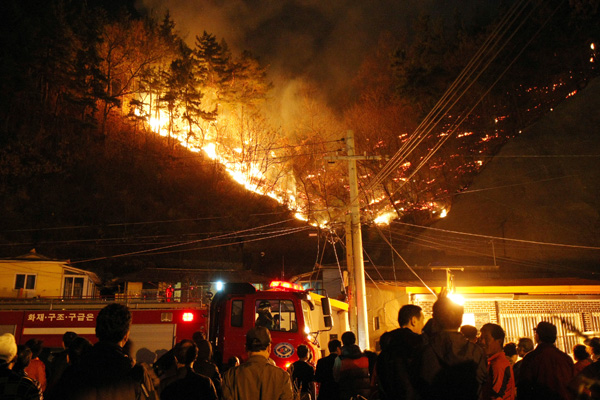 A fire blazes through the hills of Yongheung-dong in Pohang, North Gyeongsang, on Saturday, leading to one death and 14 injuries. The fire was one of 27 mountain fires that occurred over the weekend causing some 110 hectares (271 acres) of damage throughout the country due to a dry spell and high winds. By Gong Jeong-sik

Firefighters combated 27 separate mountain fires that blazed across the country over the weekend including incidents in Ulsan and Pohang that led to evacuations, burning of properties and more than 110 hectares, or 271 acres, of forest and at least one death.

The fires were aided by an unusually warm, dry weekend and high winds. But most were caused by human error or, in one case, a boy’s prank.

Orange and crimson flames blazed across the back hills of Yongheung-dong, northern Pohang in North Gyeongsang, Saturday afternoon, casting a murky gray smoke over the neighborhood.

The fire in the port city started around 3:50 p.m. Saturday and spread rapidly, leading to some three hectares of damage. The fire was contained by firefighters by noon yesterday.

Stiff winds spread the fire to residential areas leading to the death of one 70-year-old local man. Another 14 people were injured, and 56 private residences were torched.

The fire was caused by a 12-year-old middle school boy who set leaves on fire with a lighter as a prank with two other boys in the hills behind Yonghung Elementary School in Pohang, police said.

There were four separate cases of mountain fires on Saturday in Ulsan, including a large forest fire in Eonyang-eup, Ulju County, which began around 8:30 p.m. The fire damaged 23 houses, 50 hectares of land and killed 1,300 livestock including cows and chickens. Two people suffered from burns.

Dozens of villagers were evacuated to nearby towns. Ulsan firefighters and emergency workers had a difficult time containing the fire because of thick smoke and rapid winds, and they continued to spread the fire through yesterday, when it was contained.

Temperatures Saturday soared to the highest in a century for the month of March. The 21 fires starting on Saturday alone on mountains across Gangwon, Gyeonggi, Jeolla, Chungcheong, Gyeongsang and Jeju Island led to an estimated 110 hectares of damage, the Korean Forest Service said.

Since the beginning of this year, there have been 83 mountain fires which led to 137 hectares of damage.

In the same time frame from last year, there were only 19 cases of mountain fires resulting in six hectares of damage.

The Korea Forest Service said that 40 percent of the fires this year were touched off by burning of banks around fields and rice paddies, a method used by farmers to get rid of pests. A further 22 percent were caused by incineration of trash and 14.5 percent by careless cigarette smokers.

Earlier Saturday in Pohang, another forest fire around 2:50 p.m. spread in Yeonil-eup, Nam District, which was contained the next morning around 7 a.m.

Police said a 68-year-old man surnamed Kim had been in the process of disinfecting a beehive by burning mugwort when embers spread because of the wind.

Bonghwa County, also in North Gyeongsang, saw damage of 15 hectares from a mountain fire that began around 3:40 a.m. on Saturday and was contained after 10 a.m. the next morning. Some 900 emergency workers, including all of the county’s officials, had difficulty combating the flames, which police suspect started from a cigarette butt discarded by a local resident.

Ulsan in the past month also had meager rainfall of 15.3 millimeters, a 72 percent decrease from last year’s 55 millimeters.

Weather authorities issued dry air alerts in places like Daegu and Pohang for five consecutive days since Wednesday. Dry air warnings are given when effective humidity is less than 25 percent for at least two days.

And because there were so many fires, there was a shortage of fire extinguishing helicopters, leading to delays in the fire being put out. The mountain fires were contained by yesterday afternoon.

The Ministry of Public Administration and Security stated yesterday it would provide 2 billion won ($1.8 million) in aid for Pohang and Ulju County in Ulsan to recuperate from the fires.