Gangjin holds the exiled spirit of a great Joseon scholar

Gangjin holds the exiled spirit of a great Joseon scholar 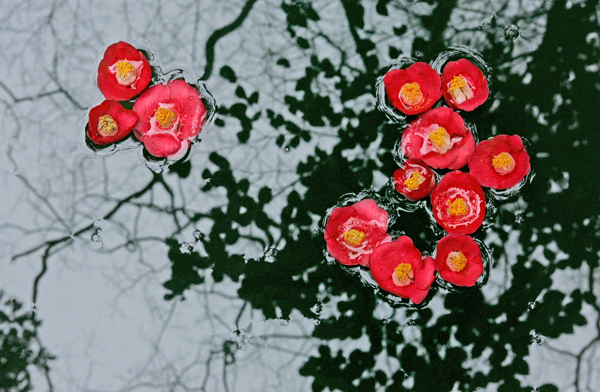 Fallen camellia flowers rest on a pond at Dasanchodang, the house where renowned Joseon scholar Jeong Yak-yong lived in exile. It’s said that Jeong used to forecast the weather based on the behavior of carp he bred in the pond. The house is in Gangjin County, South Jeolla.

Gangjin County in South Jeolla is not only known for its beautiful scenery but also for its historic significance. Jeong Yak-yong (1762-1836), a man regarded as one of the greatest scholars of the late Joseon Dynasty (1392-1910), was sent into exile here.

Jeong taught students and wrote some 500 books during his 18-year exile in the region. Among them are “Mokminsimseo,” a text about the virtues local governors should aspire to, and “Heumheumsinseo,” a book on jurisprudence. 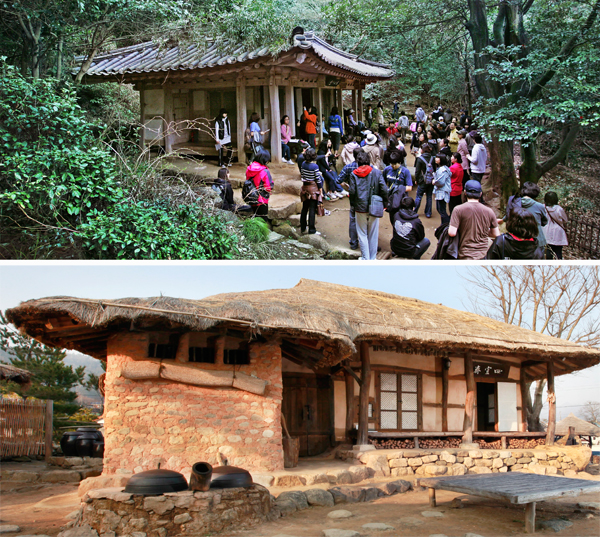 From top, Sauijae is the tavern where Jeong taught students for four years with the help of the owner. Dasanchodang is crowded with visitors who want to explore the legacy of one of the greatest scholars of the Joseon era.

Jeong, whose pen name was Dasan, spent the last 10 years of his exile in a house that has now become a kind of shrine to those who study him. Called Dasanchodang, which means “thatched cottage of Dasan,” it’s a popular tourist destination.

Jeong’s life started out well - he was a promising scholar who enjoyed great support from King Jeongjo. But after the king died in 1800, he was accused of being a Roman Catholic, which was illegal in Joseon. He was banished to Gangjin in 1801. 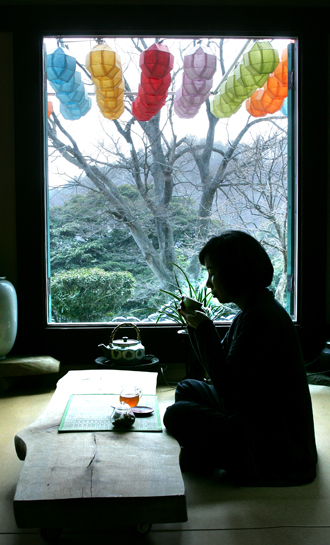 A teahouse adjoins Baengnyeon temple, and Jeong and the monk Hyejang must have had tea together there.

Grief-stricken, the exile wasted a period drinking at a small tavern in Gangjin run by an old lady. But he soon pulled himself together with the help of the owner and her daughter.

He mentored the young people he met at the tavern for four years until he met Hyejang, a monk from Baengnyeon Temple. Hyejang helped him to move to Boeun Sanbang, a small hermitage near a temple on the hill behind Gangjin Village.

Four spots around Dasanchodang are said to most hold Jeong’s spirit - a spring he is said to have dug by hand, the flat rock he used to brew tea on, a pond in which he raised carp and another rock he engraved his letters on.

An even bigger draw is the path that leads to Baengnyeon Temple from the house. Along the 800-meter-path, visitors encounter green tea fields and a camellia forest that is designated Korean Natural Monument No. 151.