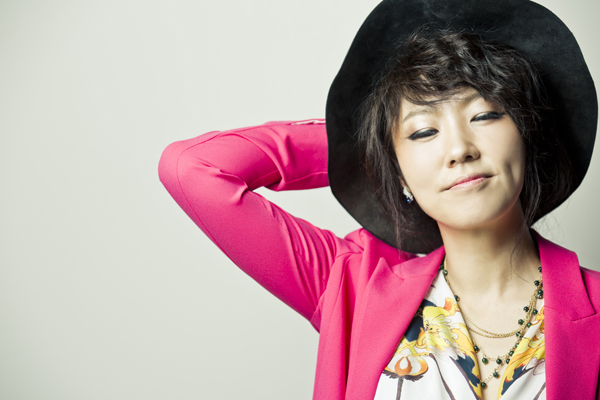 At President Park Geun-hye’s inauguration ceremony, four divas sang a reinterpretation of the national folk song by Yang Bang-eun. Everyone knew veteran singer Insooni, musical actress Choi Jung-won and pansori (traditional narrative singing) master Ahn Sook-seon as they sang “Arirang Fantasy.” But many were left wondering who the one with the jazzy voice was. As a result, jazz vocalist Nah Youn-sun’s name became at one moment the most-searched keyword in the country on the day.

Although quite new to the Korean public, Nah has a large following in France and across Europe, and has performed on more than 200 stages in 25 countries. The 43-year-old jazz singer was made a Chevalier of the Order of Arts and Letters by the French government and ranks highly on European jazz charts. Her upcoming solo concert at the legendary Theatre du Chatelet in Paris on March 25 is attracting media attention as performing there means an artist has entered the top tier of performers in France. Despite such recognition across Europe, Nah says everything that has happened for her has been by chance.

“My whole journey has been coincidental. Entering the music world at the relatively late age of 26; being loved by the French and Europeans as an Asian jazz singer, singing at the inauguration ceremony of President Park Geun-hye, all these things are like a dream. I never planned them.”

Nah will hold three concerts next month in Korea. The Korea JoongAng Daily sat down with her last week. Following are some excerpts from the interview. 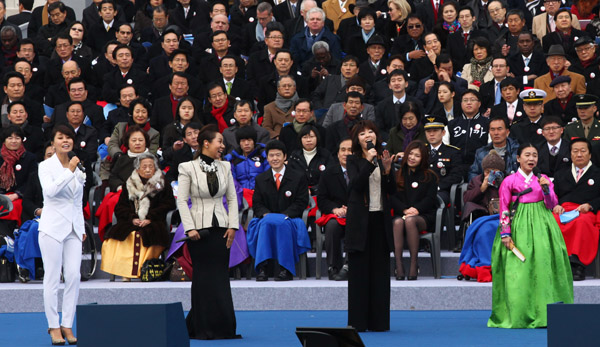 Q. You said everything has been coincidence. But to start studying something totally new in your mid-20s, you need to do at least some planning to make sure you’re doing the right thing. But you said you didn’t know anything about jazz while you were living in Korea. What made you decide to study it?

A. After graduating from university, I worked in the PR department of a fashion company. But I felt like it wasn’t for me so I quit after eight months. While staying home doing nothing, I was wondering what to do with my life and my friend, who knew that I enjoyed singing, suggested I audition for a musical called “Subway Line No. 1.” I’d never thought of doing musicals growing up because I had silently pledged to myself that I wouldn’t set foot in that industry. My mother is a member of the first generation of musical actresses in Korea and I knew how difficult the life is. But I thought it’s better to do something than nothing, so I auditioned and got a role. That’s how I joined the musical, which has become one of the longest-running in Korea.

After getting some experience on stage, I wanted to study more. I guess that hereditary inclination toward music - as my mother is a musical actress and my father is a classic vocalist - was bubbling inside me. My friend told me to study jazz. Until then, I had never thought of jazz as a musical genre. It was just all new to me. So I went to Paris in 1996.

Why did you choose to go to Paris to study jazz and not to America?

That’s why I say this is all so coincidental. If I didn’t study in Paris, I don’t think an Asian jazz vocalist like me would receive so much attention. If I knew a lot about jazz and the history behind it, I guess I would’ve gone to America but I was a big fan of chanson [lyric-driven French song] and I heard that one of the first jazz schools was in Paris. Now, many world-renowned musicians tell me that I made a great choice.

While you were studying jazz, did you feel like that was where you were supposed to be? Did you instantly think you were cut out for it?

No, not at all. After the first year, I told my teachers that I wanted to quit. I wasn’t born with a sense of swing and I didn’t speak French fluently. Everything from memorizing the names of the musicians in French to constantly feeling that my voice was too thin for jazz, drove me into thinking that this wasn’t my road. But my teachers stopped me and made me listen to European female jazz vocalists, assuring me that I could be jazzy with my voice.

While listening to those singers, I noticed that so many of them had thinner voices than I did. They were all singing in their own style and I admired that. So I continued studying. The more I studied jazz, the freer I felt. I loved the way that you can sing differently each time and I became a jazz singer.

You’re more known in France and across Europe than in Korea. Did you plan to start performing in Europe rather than in Korea or was that also a coincidence?

After graduating from jazz school, I was going to come back to Korea. But the school director asked me if I could stay there and teach students.

I was so surprised that I replied, “I just finished studying. How can I start teaching others?”

Then the director told me that I could just teach the students what I learned as a student who came to Paris without any knowledge of jazz. So I began teaching students and formed a band to perform in France. But somehow we were invited to more and more venues not only in France but across Europe. And here I am. 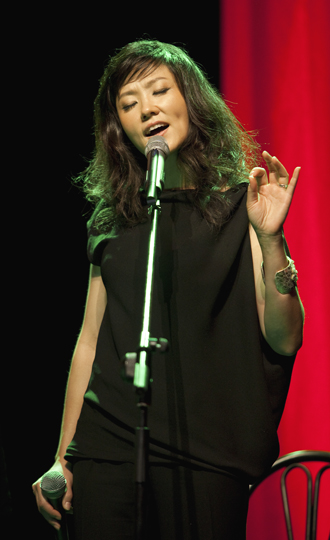 Nah Youn-sun is scheduled to perform in Seoul on April 17 at the LG Arts Center. Provided by Hub Music

I think the director thought it was impressive how an Asian girl who couldn’t speak a word of French and knew nothing about jazz would come all the way to Paris to learn jazz.

But for me, because I didn’t know anything, I knew I had to study harder than the other students. So I went to four different schools at the same time. I studied at a jazz ecole and a jazz conservatory. I knew I needed to learn more singing technique so I also attended a school for vocal music and also one for jazz ensemble. I also took private lessons. While walking around school, I always had earphones in to listen to jazz. I think my efforts looked good to the director.

How did you get to join the three other divas to sing “Arirang Fantasy” at the president’s inauguration?

Such a great chance was never supposed to come to me. I was so shocked when they called me to sing with them. But I knew why they asked me. It’s because I’m quite known for singing “Arirang” in a jazz style. Whenever I perform, I include at least one Korean song and it’s usually “Arirang.” Again, that’s why I call it a coincidence. I’ve been performing “Arirang” with my band for ages and suddenly the song got registered on the Unesco heritage list and they took notice of me. So I guess that’s why I was included in the celebration.

Why did you start singing “Arirang” in Europe? Did you feel an obligation to promote Korean culture?

Actually, it wasn’t me who first came up with the idea. My guitarist Ulf Wakenius told me one day that he knew a Korean song and played the tune on his guitar. It was “Arirang.” I was really shocked that he knew it. I told him that I was looking for a Korean song to sing at our shows and suggested playing that one. Then he asked me if I could sing it. I said, “Can I sing it? Nearly everyone in Korea can.” So we started performing “Arirang.”

To my surprise, audiences, regardless of their nationality, shed tears while listening to our performances. Many Koreans don’t believe it when I tell them but they really cry. That’s the charm of “Arirang.” Some say it makes them homesick and some say it brings them memories of the old days. I believe there’s other song that has so many variations in the world. I want to let the world know about it.

Your new album “Lento” was recorded in one take. Is it common to record jazz albums like that?

Not all of them are but many artists choose to do so. The band members and I used to play two or three times for a studio recording. One day the guitarist in the band told me that even if I sing two or three times, he was sure that I’d pick the first one. And I really did. Ever since, we’ve been recording all our albums in one take. It’s because after the first one, your thoughts intervene. When you’re singing or playing for the second time, you want to add something or remove something. It’s not that the second or third outcome is wrong or not as good as the first take, but they’re different. The first take usually has more freedom and is the most exciting. That’s the beauty of jazz.