To his rivals, Tiger looks like the old Tiger again

To his rivals, Tiger looks like the old Tiger again 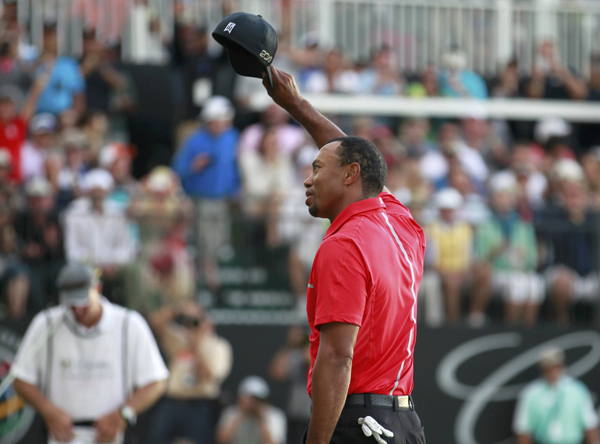 Tiger Woods reacts after his final putt on the 18th green during final round play in the 2013 WGC-Cadillac Championship PGA golf tournament in Doral, Florida, Sunday. Woods had a two-stroke win. [REUTERS/NEWSIS]

MIAMI, Florida - He made 27 birdies on his way to a two-stroke win in the WGC-Cadillac Championship on Sunday and needed just 100 putts in 72 holes as he clinched his second victory of the young year.

Yes, it looks like Tiger Woods is well on the way back.

And if there is any doubt about Woods being close to returning to the pinnacle of the game, a win at the Arnold Palmer Invitational at Bay Hill in two weeks would send the 14-times major winner back to number one in the world rankings.

“It’s very simple. I feel like my game is becoming more efficient and more consistent day-in, day-out and I am very pleased with the progress I’ve made with [swing coach] Sean [Foley].”

The debate over whether Woods is truly back to his best, to the kind of devastating form he showed in the early 2000’s, will not be over until he ends his nearly five-year wait for another major title.

But his rivals see all the signs of Tiger being Tiger again.

“His attitude and what I saw this week and his belief in himself again, looks very similar to where he was in the early 2000s,” said Steve Stricker, who was runner-up at Doral on Sunday, two strokes behind Woods.

“He just seems in a better place mentally to me. He seems to be having fun and seems to have a lot of confidence in himself and his game.”

Stricker helped Woods with his putting this week, but while he used that advice to be deadly on the greens he was consistent and controlled through all aspects of his game.

After his return to play following the break-up of his marriage in 2010, Woods showed flashes of his talent along with some dramatically wayward shots, particularly after he started to redesign his swing with coach Sean Foley.

While Woods is not bombing his driver as far as he did in his glory years, he is long enough and still has his superb iron and short game well in place.

“His driver looks like it is a bit safe. He doesn’t look like he’s got the 350-pound bomb in him anymore,” said Northern Ireland’s Graeme McDowell, who played alongside Woods in the final two rounds.

“Everything is just under control on the tee. It’s a cut and it’s in play and that seems to be the way he’s learned how to get his game. Get it in the fairway and then from there, we know how good he is,” he said.