Since face-lift, Equus sales on a roll

Since face-lift, Equus sales on a roll

Sales of Equus, Hyundai Motor’s flagship, picked up after the luxury sedan received a face-lift in early December.

“The sales figure of the Equus is quite surprising, because the price of the sedan has slightly gone up this year by 400,000 won ($365) because of a hike in individual consumption tax,” said an official from Hyundai Motor. “Also, we had the Lunar New Year holiday in February [which normally reduces demand].”

The sales surge can be attributed to the car’s face-lift Dec. 6, industry sources say. 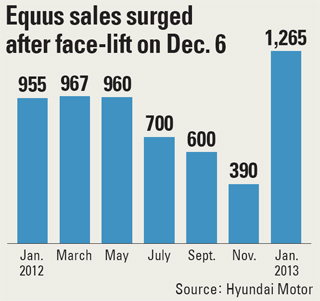 Equus was introduced in 1999 and the second generation came out in 2009. Last year, before Hyundai rolled out its upgrade, sales had been falling as consumers turned their eyes to other import brands like BMW and Mercedes-Benz. Luxury import carmakers have been introducing more models to the Korean market and employing aggressive marketing strategies.

Amid fierce competition, 600 Equuses were sold in September, 546 in October and 390 in November.

Compared to previous Equus models, the 2013 sedan lost its chrome front bumpers and the grille is a semi-matte type that shines less. When the automaker unveiled the makeover, it said it tried to focus ratcheting back its high-class, fancy image while maximizing dignity and sophistication.

Sales also got a boost from President Park Geun-hye’s inauguration ceremony Feb. 25. The new president rode in a bulletproof Equus limousine in a procession that was broadcast live nationwide.