U.S. nukes to remain in South

U.S. nukes to remain in South

A high-ranking South Korean government official told the JoongAng Ilbo yesterday, “If North Korea makes a nuclear attack, retaliation can come from U.S. nuclear weapons stationed in Okinawa or Guam. But considering the time that might take, we need to have a nuclear weapon near the Korean Peninsula.

“By not withdrawing U.S. weapons participating in the Korea-U.S. military exercises, we decided to let them stay a while and see what happens in North Korea,” he said. 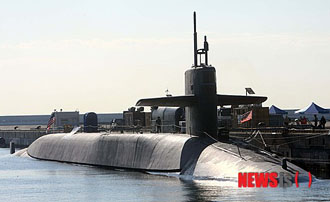 The joint Key Resolve exercises began yesterday and will continue through March 21. Roughly 10,000 South Korean troops and 3,500 U.S. soldiers will take part in the exercises, along with some high-end U.S. aircraft and submarines.

The drill practices the swift reinforcement of U.S. troops to the peninsula in case of an emergency like an outbreak of war with the North.

The Foal Eagle exercise that started on March 1 will run through April 30.

For days, Pyongyang has threatened attacks on South Korea and the United States over the drills, including “precise nuclear attacks.” It has also threatened to nullify the 1953 armistice that halted the Korean War.

“We decided to convene another Korea-U.S. submarine drill after the Foal Eagle training ends at the end of April,” the official told the JoongAng Ilbo. “We are still negotiating [with Washington] how to utilize the nuclear weapons after then.”

The official did not specify which warships would remain behind with nuclear weapons.

Sources in the South Korean military told the JoongAng Ilbo that a nuclear-armed submarine is a strong candidate.

“Since the third nuclear test by North Korea in February, there have been calls for us to possess a nuclear weapon,” a South Korean military official said. “Among various options - our own development, adoption of tactical nuclear weapons and utilizing the U.S. nuclear umbrella - the third is the most realistic.”

Key Resolve has deployed some advanced U.S. weapons and systems, including F-22s, the most advanced stealth fighter in the United States, and the USS Lassen (DDG-82), a guided missile destroyer.

The Ministry of Unification, which is in charge of most inter-Korean issues, said yesterday that North Korea didn’t answer any calls coming from five hotlines between Seoul and Pyongyang.

“However, it doesn’t mean that Pyongyang indeed cut off the lines,” a Unification Ministry official told reporters. “The lines are still connected, but no one picks up the phone.”

The North threatened to “scrap” the 1953 armistice agreement if the joint exercises began and to “block all liaison lines” between the two Koreas. The Unification Ministry official said there is still one line that the regime answers, which is used for communication regarding the Kaesong Industrial Complex.

“Every day, we use the line to report on commuters entering the complex,” the official said. “The complex and the line were both working yesterday.”

The official added the industrial complex, to which hundreds of South Korean workers and businessmen commute, was operating as usual.

“When it comes to provocations from North Korea, we should sternly respond to them, but we also should not stop our efforts to start a trust-building process on the Korean Peninsula,” she said, according to her spokesman Yoon Chang-jung.

Although the head of the National Security Council and the minister of national defense have not been formally appointed, Park held talks with the nominees for the positions.

The Rodong Sinmin, the newspaper of the ruling Workers’ Party of North Korea, did more saber-rattling yesterday in an editorial.

“Starting today, March 11, the Choson Armistice Agreement has been entirely rescinded,” it said. “Now, the day of final showdown has come.”

However, Kim Chun-sig, deputy unification minister of South Korea, said the armistice agreement can’t be scrapped unilaterally by North Korea. “Any revision of the agreement should be agreed by both signing parties.”