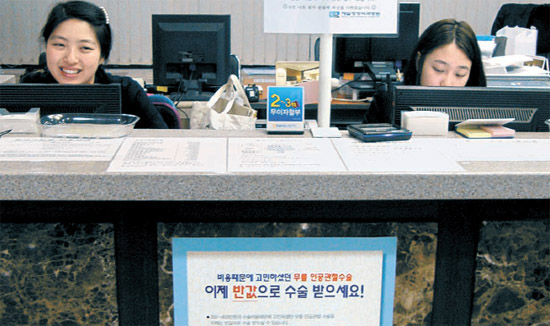 A 73-year-old Seoul resident surnamed Jang, whose knees were hurting so bad that she could not walk, recently received knee replacement surgery for a lot less than she expected.

Jang paid 1.5 million won ($1,368) for the operation that would have cost her double the amount normally.

“Though my children were urging me to undergo surgery, it was not an easy decision to make because of the high price tag. It was so relieving that I was able to have the surgery at half-price” said Jang, who was discharged from the hospital late last month.

Amid the growing competition in the medical community, coupled with an increasing number of clinics, many hospitals are offering discounted surgical operations and treatments to lure in potential patients, some offering to provide surgery at half the original price.

The orthopedic clinic is now offering the knee joint replacement surgery for a price ranging from 1 million won to 1.5 million won, a sharp drop in price compared to the past when the clinic charged patients from 3 million won to 5 million won for the same operation.

“Economic conditions affect people suffering from knee or spine pain as to whether or not to have operations, as this type of pain is not considered in need of immediate surgical treatment,” said Kwon Ju-hwa, Cheil’s chief administrator.

“We have excluded procedures not covered by the national medical insurance in attempts to trim costs and are mulling over including other orthopedic surgeries in the special offer.”

Oriental medicine clinics are following suit in offering treatments at a discounted price. Jaseng Oriental Hospital, which has 15 branch clinics in the country, has been offering nonsurgical spinal treatments for half their original price since January this year.

Park Byung-mo, chief doctor at Jaseng, told the JoongAng Ilbo he has seen “a 30 percent surge in the number of patients for the spinal treatment” this year.

Park added that many patients are looking for treatments at discounted prices as the national medical insurance does not cover spinal Oriental medicine treatments.

“We are now considering expanding a special offer period,” said the doctor.

Cosmetic, dental and dermatology clinics are also joining in the trend. One dermatology clinic near the affluent Yeoksam area, southern Seoul, has put out an ad touting its special laser and vitamin treatments at discounted prices, while one dental clinic in the same area offers a 40 percent discount for teeth whitening.