Fire-starter, 12, to be tried as juvenile

Fire-starter, 12, to be tried as juvenile 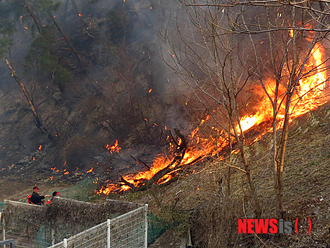 POHANG - The 12-year-old boy whose antics with a cigarette lighter led to a fire in Pohang that killed one man and destroyed 50 buildings and 6,300 trees will be tried as a juvenile.

But his parents may be liable for the millions of dollars in destruction.

At 3:32 p.m. Saturday, the 12-year-old boy surnamed Lee set leaves on fire with a lighter as a prank with two other boys in the hills behind Yonghung Elementary School in the port city of Pohang, North Gyeongsang.

It caused the death of one 70-year-old local man and injured another 14 people.

The Pohang city government said a total of 89 buildings were damaged from the fire, including residences and shops, and 50 of those were completely burned.

The Pohang Bukbu Police Precinct sent documents to the juvenile branch of the Daegu District Court yesterday. Defendants under 14 are tried in juvenile courts.

The boy was questioned by the police on Sunday and sent home. He went to school yesterday.

The police said the maximum penalty for Lee would be two years in a juvenile correction facility. He will not have a criminal record.

According to the country’s juvenile laws, a court can give juvenile convicts eight different punishments such as community service, correctional treatment programs, treatments in a mental institution or time in a juvenile correctional facility.

“The maximum level is two years but most courts generally sentence a juvenile to six months,” a spokesman of the police said.

Legal analysts said that victims of the fire might make claims against the boy’s parents.

“The parents might have to compensate each person who suffered damages,” Jeong Jae-cheon, an attorney, told the JoongAng Ilbo.