In midst of crisis, military brass is caught teeing off

In midst of crisis, military brass is caught teeing off 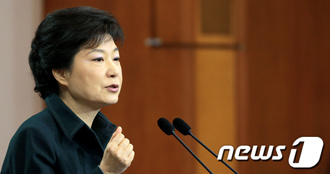 “The office of the senior secretary for civil affairs immediately launched a probe,” said Yoon Chang-jung, presidential spokesman. “We are paying special attention to the slack discipline of civil servants during this transition period of the administration.”

The Maeil Business Newspaper reported yesterday that the Taeneung Country Club, which is a military facility in the Nowon District, northeastern Seoul, was fully booked over the weekend with senior military members hitting the links.

The report said that since early morning Saturday, cars provided by the Ministry of National Defense to top brass in the military poured into the parking lot of the facility. A photo of the cars with blurred license plates was printed with the article.

Other military country clubs also were crowded, the report said.

Since the United Nations Security Council adopted tougher punishments on the North for its third nuclear test in February, Pyongyang has issued almost daily threats of war to the South. The military was ordered to heighten its vigilance to counter a possible North Korean attack on the eve of a joint military drill by Korea and the United States that began yesterday.

The opposition Democratic United Party issued a sarcastic statement about the golf-loving officers.

“I have faith in our military generals,” said Heo Yeong-il, deputy spokesman of the DUP. “They played golf over the weekend to ease the people’s anxiety and fear about the growing security threats.”

He said he was confident that the South would defeat the enemy because the generals have been boosting their strength every weekend through training on the golf course.

The Defense Ministry tried to defend the military from criticism. According to a ministry spokesman, no ban was imposed on playing golf, but most key officers canceled their golf games over the weekend.

“For now, regimental commanders and higher are ordered to maintain positions close enough to return to their units within one hour,” the spokesman said. “The military country clubs are located near the bases, so it is possible for the players to return to their bases within 30 minutes.”

The ministry said the Joint Chiefs of Staff are manning command control centers around the clock, and emergency communication channels are maintained to alert the top brass in any emergency.