Jedol performs his last trick - going back to the wild

Jedol performs his last trick - going back to the wild 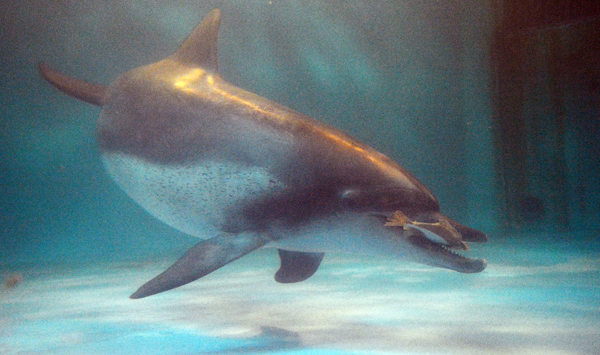 The 14-year-old Pacific bottlenose dolphin Jedol participates in training to adapt to a wild environment in an aquarium at Seoul Grand Park yesterday. [NEWSIS]

The 14-year-old Pacific bottlenose dolphin Jedol, the star of Seoul Grand Park’s dolphin show that was set to be released into waters off Jeju Island by the Seoul city government last year, will return to the sea in June after finishing nearly a-year-long training process to help him adapt to being free.

The Seoul Metropolitan Government said in a press briefing held yesterday that Jedol has successfully completed his training to adapt to nature and will be transported to a cage on Jeju Island next month.

The dolphin will receive final adaptation training for two more months in the cage and will eventually be released in the waters on the Jeju coast in June.

Jedol was one of three dolphins illegally captured four years ago by a private dolphin show promotion corporation, Pacific Land on Jeju.

The public zoo of Seoul Grand Park, which is operated by the city government, purchased Jedol and two other dolphins named Geumdong and Daepo, aged 20 and 18, respectively.

But after facing strong protests from civic and animal protection groups, including Solidarity for Animal Freedom and the Korea Federation of Environmental Movement, over animal abuse, Seoul Mayor Park Won-soon, declared in March last year that the city government will release Jedol into the wild.

The city government said it will keep the other two dolphins as they are too old to be released. The average life span of a Pacific bottlenose dolphin is about 40.

Some 100 Pacific bottlenose dolphins live around Jeju Island and were designated as an endangered species by the Ministry of Land, Transport and Maritime Affairs last October.

“Jedol will be transported to one of three floating fish cages on the Jeju coast that we have designated as the final training place,” said Lee Won-hyo, director of the Seoul Grand Zoo.

“We will attach a GPS device to Jedol in order to monitor his adaptation for the next six months. Experts judge that the success or failure of the release is generally determined in the first three months.”

Since the municipal government decided to stop the dolphin show and to release Jedol, many experts, including Ecology Prof. Choe Jae-chun from Ewha Womans University and Kim Hyun-woo, a researcher from the National Fisheries Research and Development Institute, have formed a team and managed many subjects that are necessary to lead the dolphin’s successful release, including disease management and food hunting training.

Jedol will first be transported to Incheon port via land routes and will finally be moved to Jeju via either a ship or an airplane.

“What we expect from Jedol’s release is to attract more public attention in preventing wild animals from getting captured or killed by the greed of human beings,” Choe said. “We also expect people to take more interest in other dolphins that are being used in zoo animal shows in the country.”