Better trade comes from within

Better trade comes from within 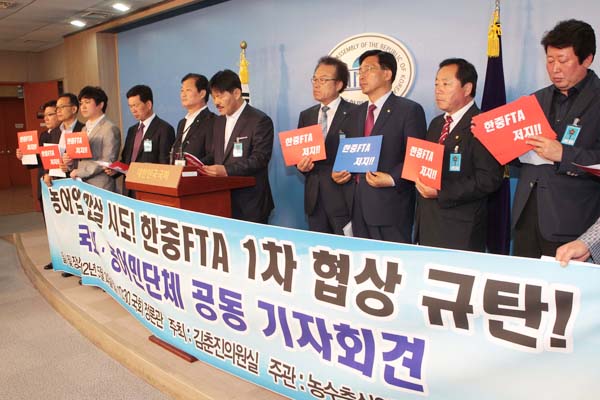 The landmark free trade agreement between South Korea and the United States turns a year old on March 15. The first anniversary of the hard-won deal draws little spotlight as the two countries are primarily engrossed with North Korea’s nuclear threats. But, silently, trade and business officials are busy counting the gains and losses from the monumental deal. The review work could arm South Korean trade officials better as they are readying for talks with their Chinese counterparts toward a similar bilateral trade pact.

Items of interest and sensitivity come up often in commerce negotiations. The former concerns those doing the exporting and the latter refers to imports that could effect the domestic industry. It was pretty clear where the gains and losses would come from a tariff-free deal with the United States, but it is an entirely different story with China. As there are too many uncertainties and variants to consider, it is hard to tell where the money and losses lie.

Let’s take fishery imports, for example. In talks with the U.S., Korea had to pay special attention to some items like Alaskan pollock. But with China, we would have to consider almost all raw fish. The entire dinner set of seafood dishes might come from China. There are a host of other menu items that South Koreans will have to study when negotiating with the Chinese.

It would be meaningless to separate what could benefit and hurt our industrial sectors because some could gain or lose in the same sector. In the case of automobiles, Korean cars could benefit from price competitiveness in the Chinese market over other foreign imports.

But at the same time, our roads could be invaded by inexpensive Chinese cars. China’s car exports already topped 1 million units last year. The country has a huge consumer appetite and at the same time is an unstoppable industrial giant.

Some may make money in the market, while others lose big or are even wiped out when competing on equal turf. One may not be able to rely on interest groups or associations to deliver a united voice from the industry. It would be hard to draw a consensus or data from within.

Under such circumstances, the government won’t likely have a strong voice to fight their Chinese counterpart. With the conflicts of interests in the domestic sector not even clear, all the onus would fall on the government if things go wrong later. The critical step the government should make ahead of bilateral commerce talks is coordination with domestic industries. It needs to talk directly with different industries, together work out potential gains and losses, and find compromises and balances as well as discuss damages in the aftermath of a trade deal.

The discussions and persuasions would be laborious, but nevertheless necessary in order to minimize the negative ramifications. Some experts say the success of a bilateral free trade pact between South Korea and China entirely depends on internal coordination.

Seoul was not well-prepared and tactical when negotiating with Washington. When trade and economic officials defended domestic industries, they had to face internal criticism that such talks would ruin the negotiations.

Seoul was more preoccupied with striking a deal with Washington and neglected to seek the domestic consensus beforehand. This is why the FTA with the U.S. is still opposed and protested by many. The main opposition Democratic United Party last year threatened to overturn the FTA with the U.S. if it obtains ruling power, underscoring how weak the groundwork on the deal had been.

Under the new government reorganization bill that still needs to be passed by the legislature, the external trade section will be transferred back to the Ministry of Commerce, Trade and Resources (currently the Ministry of Knowledge Economy) from the Ministry of Foreign Affairs and Trade.

Bureaucrats should stop wrangling over their jurisdiction. What is important is who can negotiate better. Who heads the Korean team should not matter much.

In future trade negotiations, ironing out differences at home could be more critical. The new government believes an industrial expert would be more capable for the job than a diplomat.

Foreign cases should not be our guidance. The foreign ministry and the economy ministry have been arguing for their defense by citing foreign examples. But they are looking for answers in the wrong places. What have they done during the vacancy of power due to the delay in passing the government reorganization plan?

They are idling away in their offices, criticizing one another, and lamenting the state of the country. They are paid to serve the nation, not themselves. The people will be watching to see if they will later make up for all the waste during these precious times.