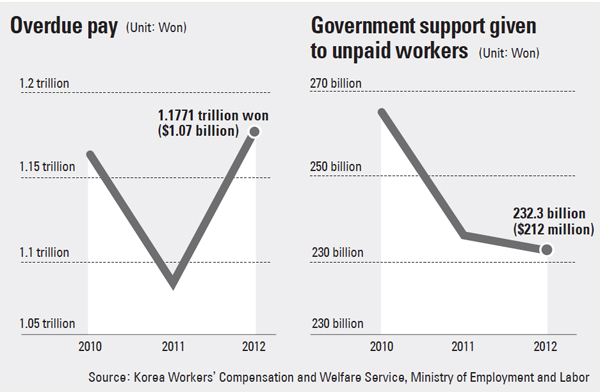 Mr. Park was a 55-year-old construction worker employed at a new town development in Gwangju since last September.

Due to the construction company’s financial difficulties, however, paychecks to Park and his 30-odd coworkers stopped in January. Even without getting paid, the men continued their work.

But last Saturday, desperate and disappointed, Park hung himself from a tower crane at the construction site.

With a continuing slump in the real estate market, and a follow-on depression in the construction industry, an increasing number of construction employees are not being paid. And a slowdown in other sectors is spreading the practice.

As a result, more workers are venting their frustration in violent ways.

A day-laborer surnamed Hwang in Gimhae, South Gyeongsang, deeply disgruntled over unpaid wages that exceeded 1 million won ($914), set fire to a metal panel factory that he used to work at last Wednesday. In January, an employee tried to steal a truck from his workplace to compensate for paychecks he hadn’t received.

The amount of overdue wages in all industries last year reached 1.17 trillion won, up 8.2 percent from the previous year, according to the Ministry of Employment and Labor.

The number of workers with wages in arrears increased 2.1 percent to 285,000 last year.

“These numbers are all due to the deepening slump in the building sector as well as other areas,” said an official in the ministry, who spoke on condition of anonymity.

But some analysts say there’s more to the story than hard times in the industry.

“The size of the wage defaults in this country is around 10 times more than that of Britain, where the workforce is three to four times larger than Korea,” said Kang Seong-bok, chief researcher at the Korea Labor Institute. One of the structural problems Hwang points to is a lack of legal measures to penalize businesses that delay wage payments.

Most construction companies do not have employment agreements with their workers that deal with disputes over overdue wages. The government doesn’t have the manpower to handle such disputes in a timely manner. The number of labor supervisors at the employment ministry is around 900, giving one supervisor up to 50 wage disputes to cover a month.

Lax legal punishment for businesses who delay payrolls is another problem. In six out of 10 wage default cases the employers end up paying fines of around 1 million won.

Since last June, the government has made public on the Internet and offline public bulletin boards the names of companies accused of repeatedly delaying payments to workers. But that’s a mild measure, analysts said.

“The criteria for the disclosure is too narrow as it is required for a business be convicted twice or more on charges of wage defaults within three years,” said Hwang Kyu-soo, labor consultant at the labor legal firm Girin. “It is also questionable whether the disclosure of some hundreds of companies’ identities will do any good in ending the practice of delayed pay.”