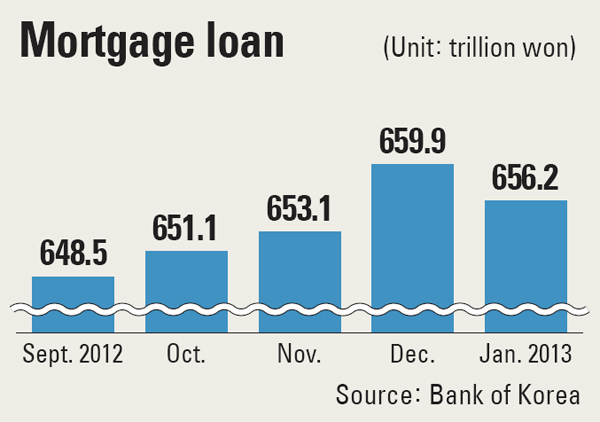 The amount of mortgages January shrunk for the first time in four months as the real estate market continues to struggle.

According to Bank of Korea, mortgage loans in January amounted to 656.2 trillion won ($599.2 billion), 3.6 trillion won less than in December, when the total hit a record high at 659.9 trillion won. Compared to a year ago, however, mortgages in January were up 3.2 percent. This is a decline compared to January of last year when mortgages grew 7.2 percent on-year.

“Borrowing rapidly fell after the tax benefits ended at the end of last year,” said a BOK official.

The real estate market at the end of last year recovered a bit on the back of a government campaign of tax benefits including exemptions on transaction tax and a lower acquisition tax rate. But, the tide turned quickly after the tax benefits expired at the end of the year.

Mortgages borrowed from commercial banks amounted to 463.8 trillion won in January, 3.4 trillion won less than the month before.

Borrowings from nonbanking financial companies were flat. In January loans taken from savings banks and credit cooperatives amounted to 192.4 trillion won, down 200 billion won from the month before.

While loans from commercial banks grew 2.4 percent compared to a year before, lending from nonbanking financial companies went up 5.1 percent. Those loans are riskier because the interest rate is higher.

Growing household debt in Korea has been a rising concern for the government and the financial industry.

When credit card debt is included, the nation’s total household loans amounted to a record 959.4 trillion won at the end of 2012.

The latest data was released two days ahead of the central bank’s monthly monetary policy committee meeting that will decide whether to change the key borrowing rate.

Many analysts are expecting the central bank to keep the rate unchanged as the global economy is showing signs of recovery including the lowest jobless rate in four years in the U.S.