North’s threats may finally be felt

North’s threats may finally be felt 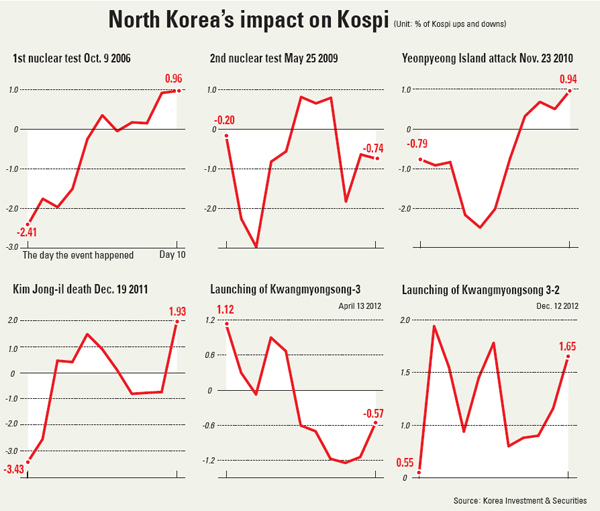 North Korea’s nuclear tests, long-range missile launches and even the death of dear leader Kim Jong-il have had little impact on the Seoul bourse.

However, market experts think the situation could be different this time against the backdrop of a depreciating Japanese currency.

Tensions between the two Koreas have heightened this week with Korea-U.S. joint military exercises taking place despite threats of nuclear attack from Pyongyang.

While the benchmark Kospi’s declines were limited and recoveries quick after previous provocations, the Seoul bourse in the past two days has been retreating, with foreign investors dumping their stock holdings, even such blue chips as Samsung Electronics and Hyundai Motor.

During trading Monday, the market fell to 1,984 before rebounding to 2,000 on the strength of institutional investors.

The limited losses during the past two trading days showed that the market remains resistant to North Korea developments, but investors seem to be taking the situation seriously.

Market experts say considering the bullish rally in other major markets including New York and Tokyo, the Korean stock market by now should be at least reaching 2,100 mark.

Dow Jones industrial average rose 50 points to close at 14,447 on Monday. The Dow after posting all-time high on Tuesday last week has been setting new records every day since.

“The impact on the market will not be huge,” said Yang Hae-man of NH-CA Asset Management. “However, there are a lot of investors who are concerned.”

Lee Seung-woo, an analyst at KDB Daewoo Securities, said that unlike in the past, the current tensions could last much longer.

“This time the market could fall steeper than in the past and the situation will not be resolved on by a one-day adjustment,” Lee said.

In fact, past data shows the market quickly recovered.

In 2006, when North Korea conducted its first nuclear test, the market fell 2.41 percent. In the first four days that followed, the market retreated then regained the lost ground within 10 days.

The situation was similar for the second nuclear test in 2009 and the attack on Yeonpyeong Island in 2010.

But when North Korea’s leader, Kim Jong-il, died the market fell more than 3 percent and an additional 2.55 percent the following day before starting to recover on the third day.