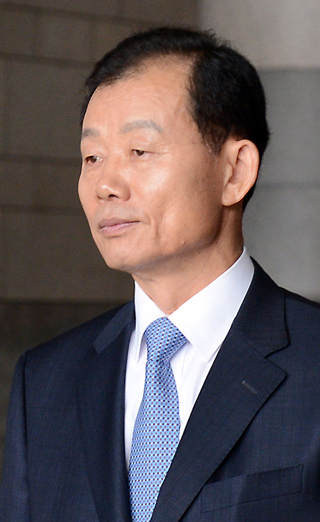 Kim Byung-kwan, the beleaguered defense minister-nominee of President Park Geun-hye, yesterday issued an appeal to the nation to allow him a chance to devote himself to the country, making it clear that he has no intention to give up the post.

“I express my serious apology for troubling the people with various scandals raised during the confirmation hearing,” Kim said. “But right now, the nation is in crisis. As a person with a lifelong career in the military, I feel a sense of urgency because we must never allow a national security vacuum, not for even a second.”

The 64-year-old former deputy commander of the Korea-U.S. Combined Forces Command was pressured by the opposition lawmakers who challenged his fitness for the job.

Promising that he will manage himself meticulously from now on, Kim asked the public to give him a chance to work for the country.

“I will take full responsibility for anything that happens after that,” he said.

The main opposition Democratic United Party yesterday said it was brazen for Kim to make the appeal.

“The people were disappointed by his press conference, because they expected him to admit his shortcomings and give up the nomination,” Representative Jung Sung-ho said.

Kim was grilled by lawmakers in a confirmation hearing on Friday. Although the ruling and opposition parties remained split about confirming the nomination, Park can appoint him anytime because the National Assembly’s approval is not binding.

Meanwhile, the Blue House yesterday unveiled the names of 37 out of the 40 presidential secretaries whose appointments were finalized. “The top priority of the recruitment was their expertise for the jobs,” said Yoon Chang-jung, presidential spokesman. “And then we put importance on the spirit of national unity and diversity by recruiting talented people from the government, academia and research institutes.”

Three secretaries who serve the National Security Council of the Blue House were not announced yesterday because of the stalled passage of the government restructuring bills, Yoon said.