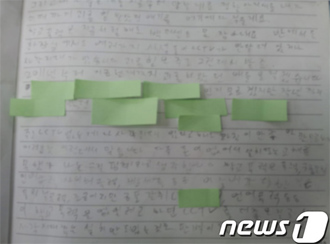 A 15-year-old high school freshman, who wrote in a suicide note that he had been bullied by classmates since 2011, jumped to death yesterday from the 23rd floor of an apartment complex in Gyeongsan, North Gyeongsang.

The boy, surnamed Choi, left two pages of a suicide note in which he named five classmates who had been bullying him and called for the installation of CCTV on his school grounds to prevent violence.

Since a 13-year-old bullying victim committed suicide in Daegu in December 2011, schools, education offices and the media have been trying to root out bullying from schools.

According to the police, Choi went to the 23rd floor of an apartment complex in Gyeongsan, opened a window in the corridor and jumped out at 7:40 p.m. Choi’s family lives on the 13th floor of the complex.

A janitor called the police after he heard a thud and found the boy in his school uniform lying on the ground.

His suicide note was found inside a knapsack he wore when he jumped.

“To mom, dad and sister, I’m sorry,” he wrote. “If I knew I was going to do this, I would have been better to you all. I am sorry that I complained to the end.”

He wrote that the bullies at his school had been extorting money from him since 2011. He identified five bullies in the note.

According to the police, on the day of the suicide, Choi got on a train at Gyeongsan Station with his friends at 7:10 a.m. and reached school, but did not go in. He returned to Gyeongsan Station at 10:43 a.m. and passed time there for a while.

At 6:40 p.m. he returned to his apartment complex, stayed on the stairs for a while, and then committed suicide.

The five bullies named in Choi’s suicide note were his classmates from middle school. Two of them were attending the same high school.

Choi’s father said his son decided to commute from home on Friday rather than live in the dormitory.

“His pants were ripped when he came home,” he said. “I suspect he could not bear the violence in the dormitory.”

Police said they will question all five students Choi identified in his note and will conduct an autopsy to detect any traces of physical abuse.