Bears suffer on farms despite lack of benefits

Bears suffer on farms despite lack of benefits 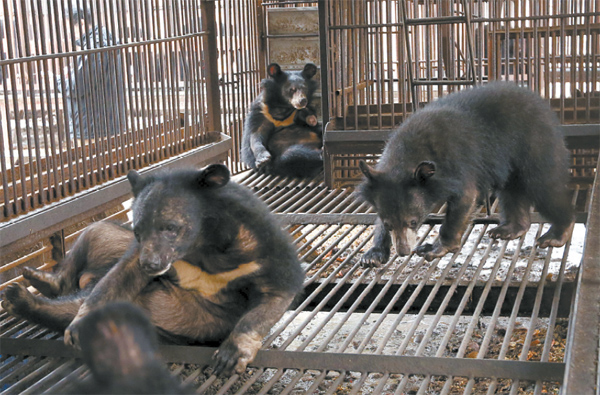 Bears are kept in a cage at a farm in Dangjin, South Chungcheong. Some 270 bears live on the farm, where harvesters extract bile and keep them confined until they are old enough for slaughter. By Kim Hyung-su

In a cramped cage, a group of distressed-looking bears stood packed tight with cut-up faces and bloodied paws at a farm in Dangjin, South Chungcheong.

Their food was leftovers from nearby restaurants. Alongside the slop were piles of odorous excrement.

The caged bears - most of which are an endangered species known as Asiatic black bear, or “moon bear” for its crescent-shaped white fur on chest - are representative of some 1,000 suffering bears living in wretched conditions as farmers “milk” them for the bile, a yellow digestive juice produced by the liver and stored in the gall bladder.

The bile is prized in Oriental medicine for many so-called health-enhancing properties, including fighting fever, cancer, cleansing the liver and improving vision.

Many of the creatures have a limited life span of 10 years. The law implemented in 2005 requires that farmers keep them for at least 10 years before slaughtering them.

“It’s hard to afford feed for them, which costs around 40 million won [$36,560] per month,” said Kim Gwang-su who runs Korea’s largest bear farm in Dangjin, where approximately 270 bears are penned in captivity.

Korea is one of a few countries in the world that legalizes bear bile farming, along with China, Laos and Vietnam.

In the past, the only way to obtain bear bile was by killing one and taking out its gall bladder.

But after the North Koreans developed the technique, bear farming was promoted in 1981 as part of Chun Doo Hwan administration’s project to raise the individual income for farmers as well as boost the population of moon bears.

Some bears are raised for sightseeing activities, but most are destined to be killed for their organs, bile and meat.

The government banned the import and export of bears in 1985 in response to those advocating animal protection and in preparation for the Seoul Olympics in 1988.

In 1993, the government imposed a ban on slaughtering bears but reversed their position in 1999 by allowing the slaughter of bears aged over 24 years old.

One bear sells for 10-17 million won for the animal itself, but farmers say that the cost of keeping bears for 10 years surpasses 20 million won.

The Ministry of Environment advises farmers to reserve at least four square meters (43 square feet) of space for a bear, but this cuts into farmers’ profits.

Some farmers slaughter bears less than 10 years old in violation of the law.

“Some farmers don’t report a cub and then kill its mom - who is younger than 10 years old - to make up the count,” Kim said.

A series of animal welfare groups at home and abroad have voiced their concerns over the inhumane treatment. The issue was raised at the 2012 World Conservation Congress on Jeju Island.

There are a number of farmers who are willing to put a stop to the practice if the government will pay them to shut their farms down.

“The market for bear bile is shrinking, and the public image is not good. If the compensation is reasonable, I’d like to sell the bears to the government,” said a farmer surnamed Yu, who runs a farm with 80 bears in Damyang, South Jeolla.

Experts argue that the government needs to step in, but the law concerning bear farming appears to only worsen the situation.

“The government should buy the bears and protect them in care centers.”