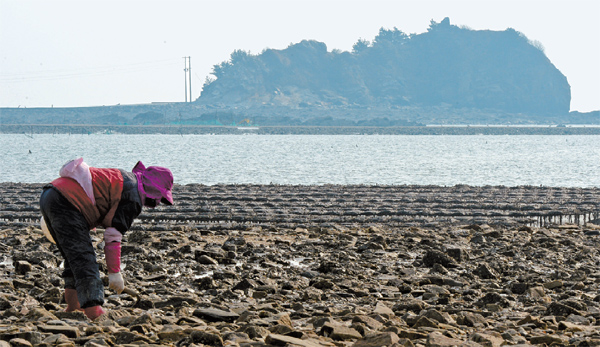 YEONPYEONG ISLAND, Incheon - When South Korea and the U.S. kicked off a 10-day joint Key Resolve exercise on Monday, which is the day North Korea threatened they would on March 6 nullify the 60-year-old armistice that halted the Korean War in 1953, people waited in a long line for a passenger ship bound for Incheon from Yeonpyeong Island.

A considerable number of island residents, mostly women with kids, who still vividly remember the day the island was shelled unexpectedly on Nov. 23, 2010, killing two marines and two civilians, have fled the island in fear of another attack.

With a stream of bellicose rhetoric coming from Pyongyang since last week when another round of United Nations sanctions against the impoverished state was passed, 143 people, including marines on leave and mothers with young children, left the island on Monday. “Anxieties have been mounting among residents here as worries over North’s provocation have been high,” said a 45-year-old resident named Sung Do-kyeong. “The exodus of residents began last week.”

Another 57-year-old resident named Lee Hyang-ran said since the shelling of the island in November 2010, “Residents have fled their homes every time the North made hostile comments.”

While a wave of residents opted to leave the island, around 230 residents who visited land, some to buy materials they needed for ongoing repairs on their shelled houses, and 30 marines who were on a break, returned to the island.

“Over 1,500 marines stationed on the island have undergone vigorous drills in preparation of the North’s provocation,” said a 21-year-old drafted private surnamed Choi, who was getting off the ship to report back to his base on the island.

The Marine Corps unit stationed on the island has beefed up its readiness against any provocative acts by the North, including tightening up its guard activities.

According to Caption Sung Hyo-bin stationed in the island, the Marine Corps has not made emergency calls to report back to soldiers on leave to the base.

Those who stay on the island to make a living or residents with no families on the peninsula spent their recent days going about their regular business.

“I already sent my wife to land last week when the North began to make threats,” said a 56-year-old resident surnamed Lee.

Fishermen left on the island were busy getting ready for the upcoming crab season in the spring, when the JoongAng Ilbo visited the island Monday.

For each crab fishing boat, six to seven crew members are required, residents said. But growing tensions between the two Koreas means the safety of crew members is more at risk, prompting a raise in wages for hired workers.

“Workers demand 3 to 4 million won [$2,739 to $3,652] in monthly wage in addition to 10 million won for contract fees, saying their lives would be at risk [under the current situation],” said Sung Do-kyung, an island resident who owns a fishing boat.