Bubbles are the next frontier in facial cleansing

Bubbles are the next frontier in facial cleansing 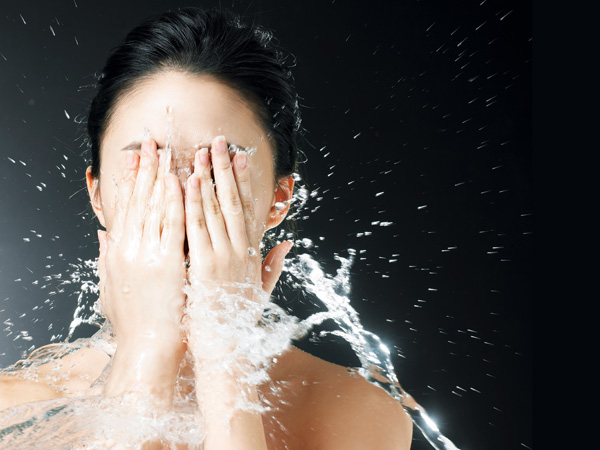 Whether companies are innovating or just looking to make more money, the beauty industry is adding one feature after another to their products.

Applying facial makeup has never been so complex. It used to involve just a small dab of liquid foundation applied with fingers or a sponge.

The advent of vibrating foundation last year, however, changed the everyday routine. In order to use the most up-to-date technology, the beauty-conscious had to learn where to install batteries and how to operate motorized tools on curvy areas.

Some remove residue with a vibrating device while others form microbubbles when applied to the face.

For those who are simply curious about the latest facial cleansers or others who seriously think about what to buy, this reporter with normal skin tried out three new products.

Hankook Cosmetics’ “360 Tansan Whip Cleanser” is the newest facial cleanser on the market.

It comes in a chic, tin package and its name has a special meaning.

The number 360 refers to the cleanser’s long-lasting bubbles, which remain for six hours after application. In addition, the product also contains sparkling mineral water, and the tansan in the name means sparkling.

The most striking feature of the product is its hair-mousse bubble texture.

At a product launch in Garosugil, southern Seoul, one of the organizers even demonstrated the richness and thickness of the bubbles by pumping the product on her palm and lifting a plastic beach ball and medium-sized plastic tray using it.

“These creamy bubbles function as a tool that gets rid of dirt on your face,” Pi said. “You don’t have to rub your face when cleansing. Just place the bubble on your face and roll it with your palms.”

Looking at the extraordinary bubbles might make potential users wonder about the ingredients, but there are only 15. There is not even a surface-active agent. Other cleansers contain up to 40 different ingredients.

Perhaps because of the limited ingredients, the bubbles were super soft but not runny at all, meaning I could massage my whole face with just one pump.

Most bubbles from other facial cleansers fade away quickly, but 360 Tansan Whip Cleanser lasted throughout the entire cleansing.

Apart from its heavenly bubbles, another strong selling point of this product is that it stays true to its original function: cleansing.

Women who use eye shadow that contains pearls or dark shades of eyeliner must often go through an additional round of cleansing around the eyes, but that wasn’t the case with this product.

And even after washing several times, the cleanser didn’t remove the moisture from my skin.

Prices are not yet finalized.

Ipkn’s Sixty-One Auto Cleanser works on the premise that an automatic cleanser gets residue off one’s face that is impossible to remove with the human hand.

A pack of the product comes with a bottle of bubble cleanser and a device equipped with a detachable soft brush made with bristles that are even thinner than human hair.

The texture of the cleanser is almost the same as that of Edition 360 Tansan Whip Cleanser. You can either use the hair-mousse type cleanser by rubbing it across your face with your hands or pump it over the automatic soft brush and switch it on.

Yet if you expect a level of vibration similar to that of other vibrating foundations, you’ll be disappointed.

The vibration of this product is quite subtle as it is generated by sonic oscillation technology. On the other hand, vibrating foundation is powered by AA batteries and feels like pressing your face against a hand-held massager.

While rolling the device over my face, I kept checking the brush and found that most of the bubbles were stuck inside.

After 60 seconds, the automatic brush stopped vibrating to protect my skin, but the function seemed unnecessary.

The bubbles themselves were also disappointing. The cleanser was one of the first with its whipped- cream-like bubbles, but they disappear when rubbed by the hands, so it’s impossible to avoid further pumps. The bubble cleanser even left my skin feeling tight and dry.

Detaching the soft brush was also quite hard because there is no button. I worried that I would break it when pulling.

Among the sea of facial cleansers that are available on online shopping malls and television home shopping channels, Oseque Melting Cleanser, produced by Songhak, is probably one of the best-selling items.

With a base of sparkling mineral water and alkaline ionic water, the gel-type facial cleanser foams into bubbles when dabbed on the face.

The company says these bubbles remove dead skin cells and residue, and it is indeed surprising to see the transparent gel turn into milky microbubbles.