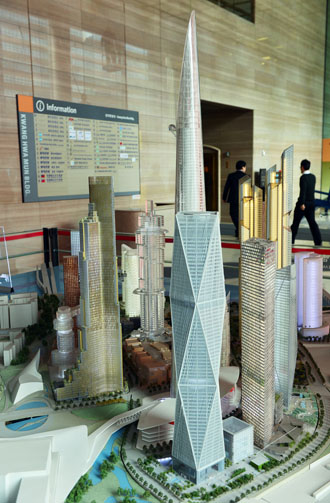 The country’s largest-ever property development project is on the brink of collapse after the project’s executor declared a default yesterday as it failed to meet the deadline for repaying a large amount of debt.

“Dream Hub has fallen into default status, but whether the whole project will collapse or not remains to be seen,” an official at AMC said.

“It has not defaulted yet,” said an analyst at Korea Investment & Securities, one of the project’s financial overseers. “Dream Hub couldn’t pay the interest on the ABCP whose maturity is due June 11. Final bankruptcy will be determined after that date.”

The Ministry of Land, Transport and Maritime Affairs made a cautious prediction that Dream Hub could go under court receivership and possibly survive over time.

A succession of failures among the partners led to the collapse.

Dream Hub had planned to pay the interest on the loans with 6.4 billion won from Korail.

But Korail, which is seriously in the red, was supposed to get 25.7 billion won from Daehan Real Estate Trust as part of compensation awarded in a trial. Daehan was told by a court to pay that amount in damages to Korail for letting Korea Post use some of the land that belongs to Korail without its permission.

Daehan doesn’t want to pay the money to Korail. The railroad operator was faced with the choice of borrowing money to help Dream Hub. 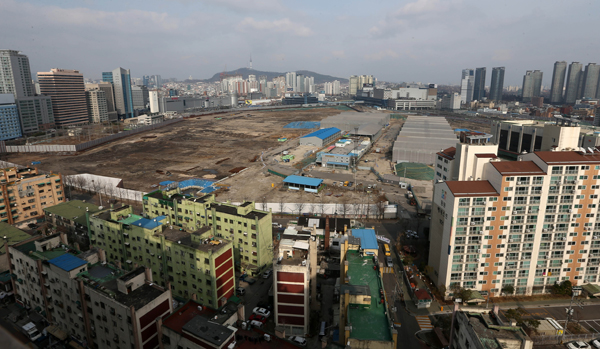 The current state of the Yongsan International Business District. Dream Hub Financial Investment, the executor of the project, said yesterday it defaulted on 5.9 billion won (5.4 million dollars) interest on 2.7 trillion won worth of asset-backed commercial paper. By Kim Do-hoon

It wanted to borrow 6.4 billion won for Dream Hub, which would have amounted to 25 percent of what the company needed, and that would jibe with Korail’s 25 percent of the project. Korail insisted that other stakeholders should guarantee the balance needed by Dream Hub. But it refused to put up more money.

Back in 2006, the Roh Moo-hyun government painted a rosy picture of turning the area - specifically the 566,000-square-meter (140-acre) on Hangang-ro 3-ga in Yongsan District, central Seoul, which was used to store trains by Korail - into a large international complex of offices, shopping malls, hotels and apartments. It wanted to make the district a landmark in East Asia full of jazzy skyscrapers, including a handful of 100-story buildings. 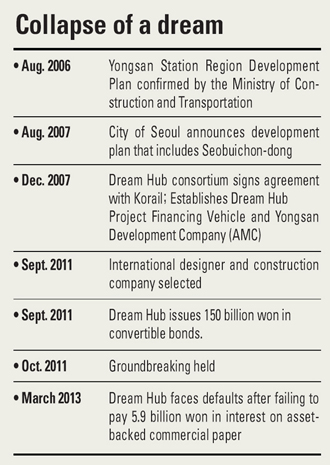 The whole project was estimated to be worth 82 trillion won and was supposed to create around 400,000 new jobs. By current law, it is impossible for the government to step in to save Dream Hub.

The collapse of the Yongsan project is expected to have economic and social ripple effects.

A total of 29 private investors in the development including Lotte Tour, KB Asset Management and GS E&C, will be hit by losses. The investors have so far invested 1 trillion won as basic capital for the project. That investment will vanish if the project is scrapped.

According to sources, the private investors are preparing to file a lawsuit against Korail for 700 billion won in damages. Korail will also lose the opportunity to shore up its balance sheet with profits from the development. The company is groaning under 4.5 trillion won in debt caused by the government’s relentless building of high-speed railways.