At the restaurant, there will be an Italian buffet, and unlimited beer and wine accompanied by live music.

There will be some time for couples to enjoy games and dance lessons hosted by a professional MC.

There will also be a variety of prizes such as hotel vouchers from the Renaissance Seoul and the Courtyard Marriott Hotel, wine, and cake.

Chef Kang was selected for his expertise as one of the top 100 chefs at the Slow Food Network’s biennial Terra Madre conference in Torino, Italy, which took place in 2006. He has created over 30 dishes with dageumbari and received a patent for his unique sashimi preparation in 2002.

During the promotion, fresh fish will be delivered by air each morning from Jeju to Seoul and Kang will work on different parts of dageumbari to produce up to 29 different tastes. The dishes include dageumbari salad, assorted sashimi, Cantonese-style dageumbari simmered in soy sauce and so on. 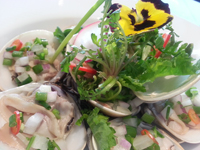 Through April 29: The hotel cafe The View runs a Mediterranean brunch buffet every Sunday. Fresh seasonal seafood, various herbs and green vegetables will top every plate. The buffet’s offerings include clam ceviche not heavily cooked and marinated with lemon juice for 20 minutes in order to sterilize bacteria that might stick to the clam. Fresh seasonal greens are mixed with the cleaned clam. Other choices include Spanish Iberico Jamon and artisan cheese.

Ongoing: As more people are conscious about their health, the hotel presents its new Allergy-Free Pure Rooms that are designed for customers who are sensitive to allergies and bacteria.

These so-called pure rooms are prepared using a two-week sanitation process. Hypoallergenic linens and mattresses are used in the rooms, and air conditioning filers are checked more frequently than in ordinary rooms. Guests can elect to stay in these rooms by paying a 30,000 won fee above the regular room rate, excluding tax and service charges.

Items offered to guests as part of the program include phone chargers, curling irons, steamers, yoga mats, make-up remover and razors to keep, borrow or buy.

Ongoing: The JW Marriott Hotel Seoul presents a promotion called “Dad, Where Are We Going?” through which children can spend time with their fathers while mothers are able to soak in the spa.

Information is culled from hotels.