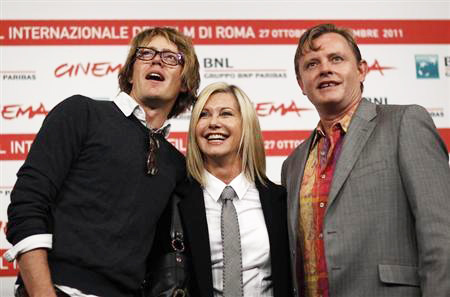 LONDON - With a range spanning the cardigan-clad sweetheart in the hit musical “Grease” and the leotarded gym instructor in the raunchy single “Physical,” no one could accuse Olivia Newton-John of playing it safe in 40 years of singing country, pop and rock.

The Australian, who was born in England and is touring there for the first time in 35 years, admits to being terrified at some of the choices she made in a career boasting four Grammy awards and a lead role in the biggest musical movie hit in U.S. history.

“I like a challenge,” Newton-John, 64, told Reuters in an interview before starting a six-concert tour that ends on March 17 in Manchester.

“I was always afraid of these changes but I did them anyway, kind of ‘face your fears’ .?.?. because I felt you also had to challenge yourself a little bit. But I was terrified.”

The 1981 release of “Physical,” a song from the album of the same name, was banned by some radio stations in the United States for raunchy lyrics such as “There’s nothing left to talk about/Unless it’s horizontally.”

Adding to the controversy was the video, in which Newton-John played a gym instructor in a tight leotard surrounded by oiled body-builders portrayed as gay in a twist ending.

“I look back now and it’s hilarious, because that was so naughty in its time,” she recalled. “That was another challenge that worked, thank goodness. It was either going to be a big success or nothing. There was no in-between with that song.”