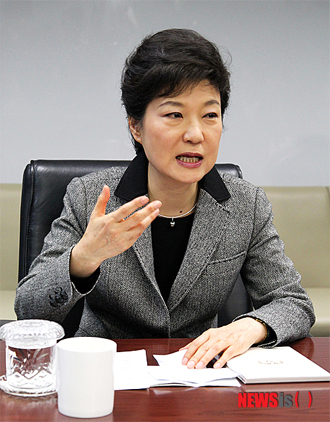 The government’s push to crack down on stock manipulation is receiving mixed responses from the financial industry, with some welcoming the plan as bringing more transparency to the market and others worrying that it will discourage investment.

Two days after President Park Geun-hye called for measures to end stock manipulation at her first cabinet meeting, the Blue House said yesterday that government agencies will come up with measures to ensure that manipulators face stern legal action.

The move is seen as part of the Park government’s efforts to regularize the underground economy and prevent huge losses for retail investors due to price fixing.

According to an FSC analysis on the trading of 35 major theme stocks from June 2011 to May 2012, a total of 1.55 trillion won ($1.4 billion) in losses was incurred by 195 accounts, which were mainly retail investors.

An official from the FSC said it has started looking for effective measures, such as fines, to punish stock manipulation activities.

Under current law, the Ministry of Justice is in charge of imposing criminal penalties on stock manipulators after going through a multi-stage legal process.

The process has been considered too complicated and drawn out, and includes market monitoring by the Korea Exchange, an analysis of the suspected manipulation by the FSS, a review by the Securities & Futures Commission, an investigation by prosecutors and, finally, a ruling by the court.

According to financial industry officials, it takes two to three years for manipulators to be punished.

“It has always been a task for us to simplify the punishment system,” an industry official said.

Nonetheless, not everyone is in favor of a crackdown.

“I understand the government wants to enhance transparency in the stock market, but I’m concerned that stricter rules to root out manipulation would shrink the overall local stock market, which has already been hit by a prolonged sluggish economy,” said an analyst who asked not to be named.

“The measure would help the new government secure new sources of revenue to run the country, but this would negatively affect the general stock market.”

Others also raise questions on the effectiveness of the government measures, noting that the number of investigators is not sufficient to effectively monitor transactions.

According to market observers, Korea Exchange has 30 employees and the FSS has 80 responsible for tracking the movement of 924 stocks listed on the blue-chip Kospi and 1,011 on the small-cap Kosdaq.

“The idea of rooting out stock manipulation has been brought up frequently since 2000,” said another analyst.

“Ending stock manipulation will be the basis of a transparent stock market. But without increasing the number of employees in charge of overseeing stock trading, Park’s initiative won’t work.”

Meanwhile the government also plans to step up its penalty for illegal subsidies given to smartphone retailers that has caused unfair competition.