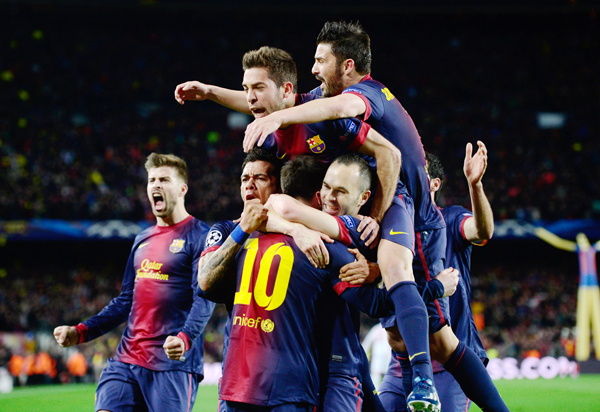 Barcelona players celebrate after Lionel Messi (10), from Argentina, scored their second goal during the Champions League round of 16 second leg match between FC Barcelona and AC Milan at Camp Nou stadium, in Barcelona, Spain, Tuesday. Barcelona won the game 4-0 and advanced to the quarterfinal on 4-2 aggregate. [AP/YONHAP]

BARCELONA - After 14 titles in five seasons, Barcelona was still lacking the epic comeback to put some added drama into its unprecedented winning run.

Lionel Messi crossed that one off the list on Tuesday.

Messi scored a brilliant brace to help Barcelona beat Milan 4-0 and guide his side into the quarterfinals of the Champions League.

Barcelona won 4-2 on aggregate after a spectacular second leg in the last 16, entering the record books as the first team to turn around a 2-0 first-leg away loss in the competition.

The four-time champion imposed its attack from the start, and Messi finished off a team move just five minutes in to give the hosts a huge boost before a screaming crowd of 99,786 at Camp Nou, Europe’s largest stadium.

Messi struck with another left-footed strike in the 40th to level the contest over two legs.

And Barcelona’s relentless pressure paid off in the 55th when David Villa netted the decisive goal before Jordi Alba added a fourth in stoppage time.

“It had been a long time since we had pulled off a historic comeback,” said Barcelona midfielder Xavi Hernandez. “We pressed them very well and played an exceptional match.”

Barcelona joins Galatasaray in the last eight after the Turkish side beat Schalke 3-2 on the night and 4-3 on aggregate.

Against the odds, Barcelona reached the quarterfinals for a sixth straight season and kept alive its bid for a fourth title in eight years.

Barcelona had failed to fight back after losing first-leg away semifinals to Chelsea last season and to Inter Milan in 2010.

Messi made sure they got it right on a third try and did so in style with his 52nd and 53rd goals of the season.

“For anyone who doubted Messi, today Messi gave a lesson on how to play football,” said Barcelona assistant coach Jordi Roura, who has been in charge since January, with manager Tito Vilanova in New York for treatment for a throat tumor.

“He is extraordinary, and surrounded by great players, he is capable of doing what he does.”

The sluggish Barcelona from the loss at San Siro three weeks ago, and its two recent defeats to fierce rival Real Madrid was nowhere to be seen on Tuesday night.

Barcelona put on yet another breathtaking display, the kind that has earned its place among the best teams to have played the game.

It went forward with orchestrated precision both in its passing and shot taking, and defended tenaciously, asphyxiating Milan’s attack before it could ever get started.

Messi had already pulled one goal back for Barcelona before Milan was even able to get the ball, much less string two passes together.

Barcelona scored early through an exquisite flurry of one-touch passes that had eluded it in recent matches. Messi received Sergio Busquets’ pass outside the area, laid the ball off for Xavi, who slid it back for Messi to unleash a curling strike that left goalkeeper Christian Abbiati helpless as it ripped into the top left corner of his net.

“We went out gunning from the start and scoring early helped us,” said Villa. “We have believed in the comeback ever since we lost in Milan, and belief combined with hard work is how you achieve things.”

Barcelona turned the tie in its favor for good thanks to its aggressive defending. Mascherano surged forward to intercept a pass inside Milan’s territory, with the ball passing through Iniesta to Xavi, who fed a through pass by the sliding Kevin Constant for Villa to size up Abbiati and swerve a strike into the far side of the net.