Lotte Mart getting into the auto-leasing business

Lotte Mart getting into the auto-leasing business 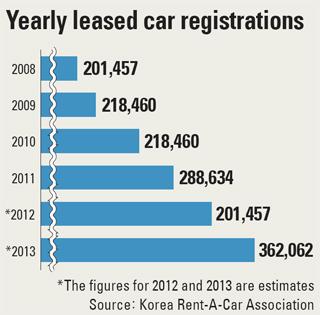 Lotte Mart is jumping into the car- leasing business in partnership with CXC Motors in light of government regulations on large discount chains, the retailer said yesterday.

Consumers will be able to lease a car for 12 months to 55 months at Lotte Mart’s Jamsil, Guro, Daedeok, Changwon and Busan stores and its online Lotte Mart Mall.

Other than these vehicles, leases are available for all domestically produced and imported cars, excluding commercial vehicles such as buses and trucks.

Lotte Mart has established CXC Motor’s rental service store C Square in five stores and plans to expand to eight by the end of this month and 40 stores by the end of 2013.

“With the start of the car leasing business, we will continue to develop and provide the best services tailored to customers’ automotive culture, such as vehicle inspections and maintenances,” said Kim Byeong-kyu, head of Lotte Mart’s affiliate business team.

Lotte Mart is not the only retailer that has jumped in the car rental market.

Homeplus was the first to make the move. In May last year, the retailer started to offer a one-day car rental service.

Customers can take the car without having to sign a contract. All that was needed was a reservation via smartphone app. There were no limit to how long the car could be borrowed and at a cost of 5,810 won per hour. After 10 hours there are no extra charge. A full day rental costs 58,100 won.

The car sharing service is estimated to be at least 20 percent cheaper than other rental services.

Although it is a new concept in Korea, car sharing service is popular in other countries, including the United State and Europe. As it saves gas and the costs maintenance and parking, the market has been growing at roughly 35 percent a year.

Homeplus expanded the service three months after it was established.