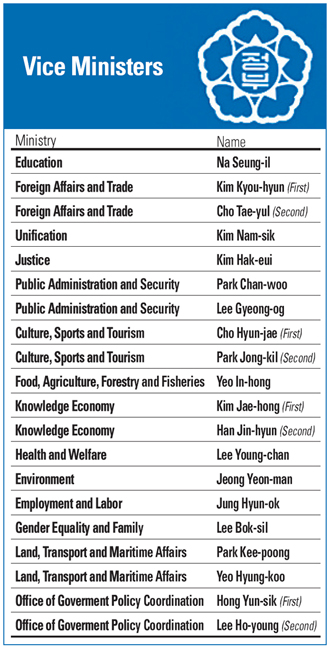 President Park Geun-hye yesterday named 20 vice ministers who are supposed to be specialists in their fields of expertise.

According to presidential spokeswoman Kim Haing, professional expertise and agreement with Park’s governance philosophy were the key to selecting the vice ministers.

Eighteen vice ministers to serve in 13 ministries were announced yesterday along with two vice ministers for the Office of Government Policy Coordination.

While most vice ministers were former or incumbent civil servants, Park recruited Na Seung-il, a professor of vocational education and work-force development at the Seoul National University, to become the vice minister of education.

Kim Nam-shik, who headed the Planning and Coordination Office of the Ministry of Unification, was also promoted as its vice minister.

Of the 20 vice ministers, six were from Gyeongsang and five were from Seoul, while three were Jeolla natives. Seoul National University graduates prevailed: 10 of the 20 were from SNU.

More appointments to head agencies under the ministries will be announced today.

On Tuesday, the Blue House announced 37 names of its 40 secretaries. Three secretaries for the National Security Council will be formally appointed after the government restructuring bills are passed.

Of the 69, 35 were incumbent or former civil servants, while 13 were professors or researchers, comprising nearly 70 percent of the power elite.

Park’s pledge to work toward national unity through diverse appointments, however, did not fully materialize as aides from the capital region and Gyeongsang prevailed.

Of the 69 top officials, 22 are from the capital area including Seoul and Incheon, while 20 are natives of Gyeongsang, where Park’s hometown is located.

Prime Minister Chung Hong-won and the presidential chief of staff, Huh Tae-yeol, are both from South Gyeongsang.

Eleven were from Jeolla, another 11 were from Chungcheong and five were from Gangwon.