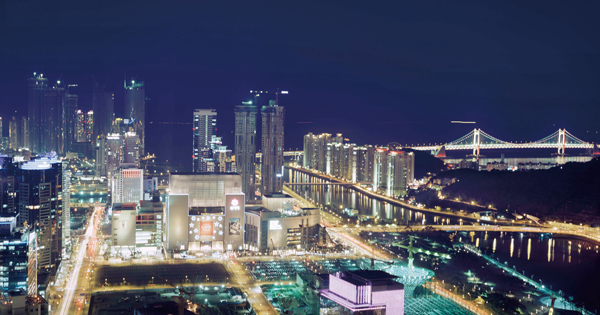 A night view of Haeundae District in Busan. [JoongAng Ilbo]

BUSAN - Amid the stagnant real estate market across Korea, there is a silver lining - not from Seoul but this southern port city.

“Haeundae has beautiful views and great weather, and the region is also a good place to invest,” said Dora Hui, 51, a Hong Kong real estate agent who bought a 330-square-meter (3,552-square-foot) apartment in the area for 2.5 billion won ($2.3 million).

Hui was giving a tour of the house to a group of 20 Chinese - a group she says were part of China’s super rich. The apartment in Aratrium, a swanky residential tower, is part of massive residential project Haeundae Marine City.

The development project has filled the area with an array of high-rise skyscrapers and fueled a boom in the real estate market, which in turn has drawn a number of wealthy Chinese and Japanese. 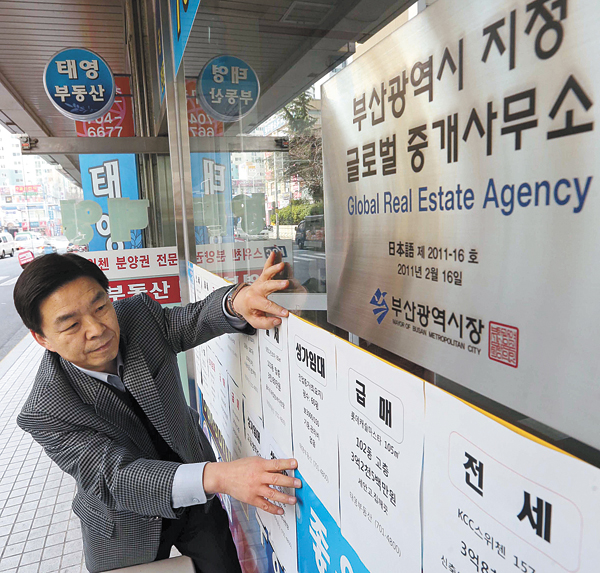 “Busan has great medical and cultural infrastructure, but the property price is only about one-fifth compared to that of Hong Kong, which makes buying a house here a good deal,” said 60-year-old Howard Hwang.

Eight Chinese have already finished contracts to buy apartments in the residential tower with the high price tag, as well as magnificent night view of the beach.

The housing units owned by the Chinese are from 224 square meters to 330 square meters, costing 1.5 to 2.5 billion won.

Foreign residents from China, Japan and Russia account for 8 to 10 percent of both luxurious residential towers We’ve the Zenith and I’Park.

The cross-continent contracts are partly thanks to the nimble strategy of real estate agencies targeting the affluent outside of Korea. 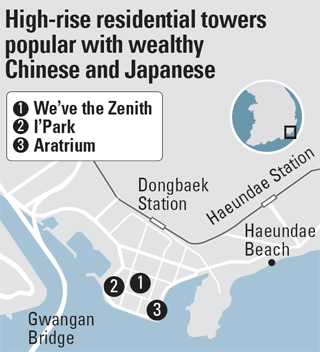 Mysore, a real estate agency catering to foreigners, held a seminar on Haeundae’s real estate market in late January at a five-star hotel in Tsim Sha Tsui, a famous tourist region in Hong Kong. A total of 300-400 Chinese flocked to the two-day event.

“Many Chinese want to have their own second house outside of China, away from the country’s smog and yellow dust,” said Kim Yoon-seob, chief director of the agency.

“Feeling uncertain about China’s politics and economy, rich people in Hong Kong also want to relocate overseas,” Kim said, adding that some 60 Chinese investors plan to visit Busan to make a contract in April through May.

In an effort to better accommodate the growing number of foreign residents, the Haeundae District designated 19 real estate agents to provide language services.

Experts point out that Chinese are buying up overseas property to hold onto tangible assets, rather than investing money in low-yielding bank bonds and volatile equities.

For worry-prone Japanese, the Haeundae region serves as a safe haven, especially after the devastating 2011 earthquake and tsunami, while Russians look for relatively warm weather to escape from the arctic cold in their home country.