Twentysomethings hope for better days ahead

Twentysomethings hope for better days ahead 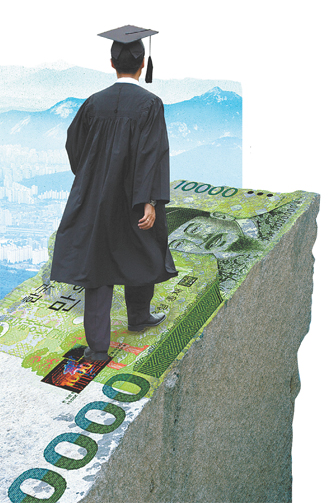 Korea’s twentysomethings are perhaps the unluckiest of generations, doomed to a vicious cycle of financial hardship.

“There is no way out from this financial poverty and cycle of debt,” Kim said. “I am only 29, but my future is full of gloom and doom.”

Her father, one of the baby boomers born between 1946 and 1965, had to take out about 10 million won in loans from his company to afford his eldest daughter’s college tuition for her final three semesters. The loans were borrowed under Kim’s name, and she was aware of them.

At the time, Kim thought she was lucky because she had three years until she had to start repaying the debt, a benefit for families of government employees. She was sure she could get a good-paying job at a high-profile conglomerate.

Instead, three years later she has double the debt and no decent job despite her 3.8 GPA, 900 TOEIC score, IT licenses and community service.

While preparing for recruitments, Kim continued working as a temporary employee at a small company, earning about 1.5 million won a month. Despite her salary, she spent more year after year and borrowed another 10 million won from a savings bank.

“Young generations don’t see the need to build up savings, because we are not like our parents,” Kim said. “We think it is impossible to accumulate up to 300 million won to buy an apartment within our lifetimes. I used to think it would be better to spend on sprucing myself up.”

Now she realizes it will be difficult for her to get out of debt.

Kim is not alone. A remarkable number of single young Koreans are carrying substantial debt, which makes it difficult to land good jobs or get married.

According to data by the Financial Supervisory Service, the aggregate of loans taken out by twentysomethings as of the end of last June stood at 9 trillion won and 19,520 defaulted on their loans.

The situation could worsen this year. The Saramin job portal recently said it did a survey that found four of 10 college students plan to borrow money for tuition or living expenses.

Another index shows more and more Koreans in their 20s are filing for the government’s personal debt restructuring program. The Credit Counseling & Recovery Service reported 6,809 such filings last year, up 4.2 percent from 2011.

Notably, twentysomethings were the only age group that experienced such growth and they accounted for 9.5 percent of the total number of applicants for the restructuring program.

When individuals fail to make loan payments for more than three months, they are legally classified as defaulters and become eligible for the program. If accepted, the amount of principal and interest in default is reduced, and their term of repayment is extended.

The country’s unemployment rate for those aged between 15 and 29 jumped to 9.1 percent in February from 7.5 percent in January, the first time the rate has surpassed 9 percent since March 2011, according to Statistics Korea.

In particular, the number of employed in the 20 to 29 age group shrank by about 159,000 year-on-year in February. The decline is attributable in part to fewer temporary and part-time jobs, according to the agency.

The total jobless rate stood at 4 percent last month, up from 3.4 percent in January. This is the highest since February 2012, when it was 4.2 percent.

There are three primary causes of increased debt among young Koreans: higher tuition, a lack of jobs and changing lifestyles.

In 2004, the average tuition for liberal arts students per semester at private four-year universities was about 2.8 million won. By 2011 in was around 4 million won, after rising about 10 percent annually.

In early 2011, there were massive demonstrations by college students demanding that tuition costs be cut in half.

When that didn’t happen, increasing numbers of students relied on various kinds of loans, but many ended up defaulting.

Meanwhile, the biggest challenge for young Koreans today is to get the good-paying jobs they want before the age of 30.

Every year, about 600,000 college graduates compete for the estimated 30,000 quality jobs offered by high-profile businesses. Many of the remaining 570,000 refuse to work for small companies to prepare for next year’s recruitment season. Many remain without work for two years or more.

“Many people over 25 have both bachelor’s and master’s degrees, making them overqualified for entry-level jobs,” said Kim Beom-seok, a director of the economic policy bureau of the Ministry of Strategy and Finance. “There’s a mismatch between the positions sought by these jobseekers and those offered by employers.”

The number of newly employed twentysomethings decreased for the 10th consecutive month in February.

“Unlike the old generations who experienced the surging value of real estate, today’s twentysomethings are less interested in buying houses and don’t see the need to invest in property,” said a report on changing lifestyles of Koreans in their 20s by LG Economic Research Institute. “They grew up when the Korean economy was at its high during the 1990s, enjoying the wealth of each household. Therefore, they tend to splurge to show off.”

According to a survey by the research institute, 49 percent of women in their 20s said they insist on buying a luxury brand bag even though they can’t afford it.

Most college graduates in the country start their careers with an average debt of 13 million won. Given that the average monthly wage of entry-level employees is around 1.8 million won, it would take 26 months to repay the debt at 500,000 won per month. 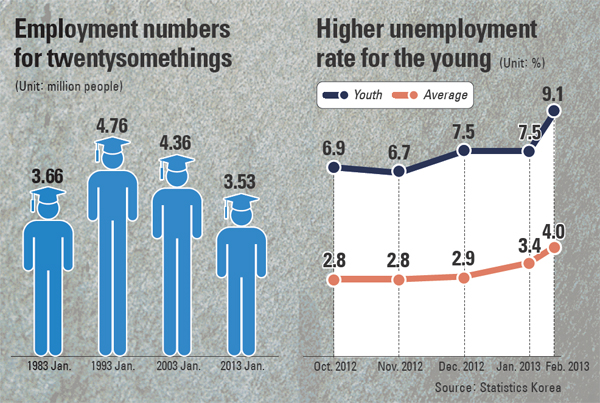 It seems like living with mounting debt is a global trend for young people around the world.

According to data from the U.S. Census Bureau, an American graduate had about $26,000 in debt on average in 2011, and U.S. students owed a total of $1 trillion in student loans.

“In many cases, graduates are left with a diploma and an enormous financial burden of student loans and credit card debt - and maybe no job in sight,” said America’s Debt Help Organization.

Young Americans, moreover, have more credit card debt than older generations due to their spending habits, according to a recent study by an economics professor at Ohio State University. The study found Americans born between 1980 and 1984 have an average of $5,700 more debt than their parents did at the same age and $8,200 more than their grandparents.

It is understandable that young people in the United States and some euro zone countries are burdened with debt given that youth unemployment rates of the countries are quite high.

According to data provided by the Organization for Economic Cooperation and Development, the unemployment rate for those between 15 and 24 stood at 55 percent in Spain, 24 percent in France and 16 percent in the United States during the fourth quarter last year.

Korea’s unemployment rate was 8.4 percent, a little more than half the average of 34 OECD countries.

The Park Geun-hye government has set helping debt-ridden youth as one of its goals. Among other initiatives, the government is focused on buying up defaulted student loans with the newly launched “People’s Happiness Fund.”

The fund will be mobilized to help people with loans that have been in arrears for at least six months as of the end of February. Debts overdue by more than six months from banks, credit card companies, savings banks, mutual cooperatives and insurance firms will be eligible, as well as those from private money lenders with at least 10 billion won in assets,

Park also pledged to increase jobs in the public sector - education, police, firefighting and welfare - and to raise the country’s employment rate to 70 percent. Late last year, the former government said it planned to hire about 15,000 new public sector employees this year.

The presidential commission on youth plans to develop an index measuring quality of jobs, level of wages, fair recruitments and welfare of employees at 100 private businesses and public institutions and corporations with a goal of creating an environment where employers voluntarily take the lead in improving conditions in the labor market.

Park has unveiled “K-Move,” a plan to provide young Koreans with opportunities to work abroad. Chances for high school graduates will also increase as the government is set to support Meister schools whose primary goal is to nurture technicians ready to work right after graduation. Seven Meister schools are scheduled to open this year.

“Over 70 percent of the country’s 20-year-olds are college graduates, so it is quite challenging to improve employment conditions for high school grads,” said Kim Ji-seon, a government official at the workforce policy bureau of the finance ministry. “The government can’t force private businesses to create more jobs.

“The government plans for a gradual change rather than a swift one. What we can do is to learn what is in demand by industries to nurture qualified workers at Meister schools and to provide more tax incentives for businesses to contribute to job creation.”