Lee Byung-hun is back with ‘G.I. Joe’ sequel

Lee Byung-hun is back with ‘G.I. Joe’ sequel 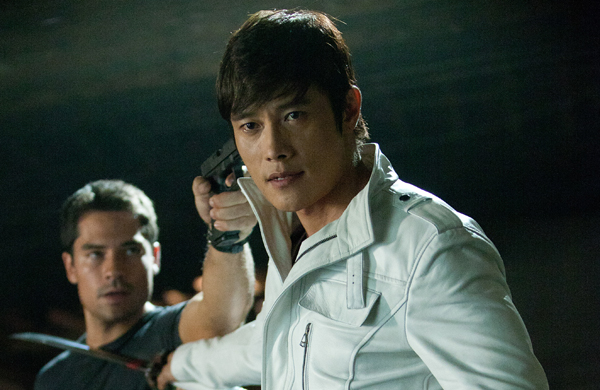 Storm Shadow (Lee Byung-hun) reveals his face for the first time in “G.I. Joe: Retaliation,” the long-anticipated sequel in which he plays a more significant role. Provided by Paramount Pictures

“G.I. Joe: Retaliation,” starring Korea’s pride and joy Lee Byung-hun alongside an A-list cast of Bruce Willis and Dwayne Johnson (aka “The Rock”), will be released March 28 to fans that have been patiently awaiting the sequel to the 2009 hit that grossed more than $300 million worldwide.

Sienna Miller and Dennis Quaid are no longer part of the story, but fans of the action classic will be glad to know that Willis steps it up to give their money’s worth of fighting and explosions.

There is rarely an action-free scene in the follow-up; in fact, there are so many bombs and guns going off that it is easy to lose sight of the plot.

But this is perhaps what makes it an interesting 3-D feature. Adding a dimension caused the film’s opening to be delayed nine months because the higher-ups thought it would perform better abroad, according to TV and film Web site Screen Rant.

Shot on location at NASA’s Micoud Assembly Facility in New Orleans, the movie was directed by Jon M. Chu of the dance film franchise “Step Up.”

Chu is an expert in movement, and his skill can clearly be seen in a film that sacrifices so much of the story line, not to mention sentiment, for emphasis on bulging muscles, nifty imagery and roundhouse kicks. 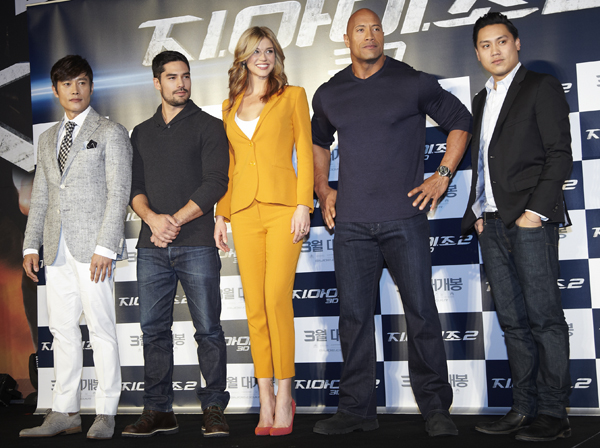 Despite the lack of human interest, the home crowd can look forward to the larger role given to Storm Shadow, the lovable foe played by Lee. He does away with the ninja mask and reveals the story behind the baddie.

“In the second movie, I’m a lot more expressive,” Lee said at a press conference held on Monday for the film’s world premiere, which took place in Seoul of all places.

Joined by cast members Adrianne Palicki, D.J. Cotrona and Johnson as well as Chu, Lee was quick to point out his significance to the plot.

“I speak a lot more and have a wider range of emotions,” said Lee, who confessed that it was hard work trying to portray a character through a ninja mask in the first film. “All that you saw were my eyes and movements.”

Although essentially playing a character that is typecast for Asian actors, the 42-year-old Lee has really made a mark in Hollywood, landing a lead in a $185 million production. His feat is particularly impressive given that the actor was born and worked in Korea for most of his professional life.

The Hollywood actors in turn said they were star struck by the actor referred to as “Byunsama” (“-sama” is an honorific in Japanese) throughout Asia.

“To meet and work with someone like Lee was an honor and an experience,” said Palicki who plays the token sexy female, Lady Jaye.

She added that Lee’s fame will surely catch on in Hollywood just as it has in Asia.

Meanwhile Johnson said that he also has a lot of respect for his Korean co-star’s physical preparation and strict exercise regime.

“His discipline as an actor is one of the greatest things about him,” said Johnson, a pro wrestler turned actor. “I’m a big believer in discipline and Lee Byung-hun.”

Meanwhile Lee was quick to return the favor by heaping praise on his brawny co-star.

“He says that I’m disciplined, but really his whole life is about discipline,” said Lee, who admitted that he was ashamed of his size when next to the Hollywood heavyweight.

Despite being the smaller man, for his part, Lee said he played the role of gracious host by showing the cast around town, helping them taste the real Korea, including “needless to say, soju.”

As for the film’s potential at the box office, though, Lee said that was up to the fans.

“Of course Korean films are in their prime at the moment,” said Lee.

He is indeed at the top of his game at home. His latest domestic film “The Masquerade” pulled in 12.3 million viewers and took 15 of 22 prizes at the 49th Daejong Film Awards last year.

“But still, I hope you’ll like my Hollywood movie,” Lee added between laughs, especially because fans will get to “see me close up.”

As if that wasn’t incentive enough, Chu drove the point home.

“You get to see Lee Byung-hun’s abs in 3-D,” said the director, who is most certainly in a position to know.