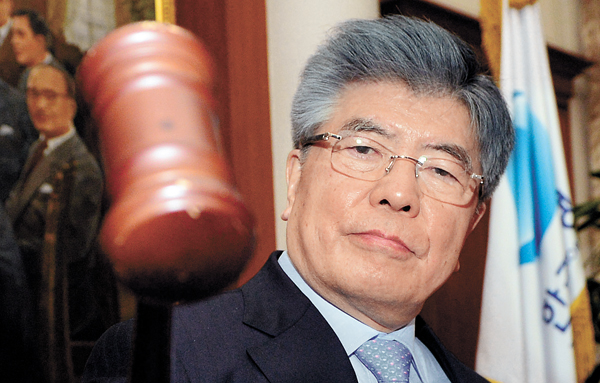 The Bank of Korea yesterday left its benchmark interest rate unchanged at 2.75 percent for the fifth consecutive month, citing improvements in the global economy.

The last time the central bank lowered the rate was in October.

The decision came against the backdrop of deepening geopolitical tensions between the two Koreas, continuing depreciation of the Japanese yen and a struggling domestic economy.

Although some market experts had projected the central bank would likely maintain the interest rate at its current level, others suggested the bank might lower the rate. Betting on further easing of monetary policy, the rate for three-year treasury bonds hit an all-time low of 2.6 percent this week.

And the Korean economy is expected to experience flat growth in the 1 percent to 2 percent range year-on-year in the first quarter as there have been no significant signs the tide is changing.

The manufacturing sector, service industry, retail and even companies’ investments on facilities have all retreated.

KDB Daewoo Securities projected that in the first quarter the economy would expand 1.6 percent compared to a year ago and 0.5 percent from the fourth quarter of 2012. The last time first-quarter growth was so low was in 2009, when it fell more than 4 percent because of the impact of the global credit crisis that started with the bankruptcy of Lehman Brothers.

The central bank, however, had a more positive outlook, apparently betting on sustained improvement of the United States and Chinese economies.

“The first quarter this year will likely grow much higher than in the fourth quarter,” BOK Governor Kim Choong-soo said yesterday. “In our revised growth projection that will be announced next month, we expect the current growth pattern to continue.”

Although he couldn’t give specific figures, Kim said consumer spending and facility investment have shown improvement since January.

Additionally, the central bank may get some relief from loosening the monetary policy after the nominee for finance minister hinted at tapping the supplementary budget during Thursday’s hearing at the National Assembly.

The last time the government used the supplementary budget to stimulate the economy was in 2009, when it allocated 28 trillion won ($25.2 billion). Since then, the Lee Myung-bak administration prioritized balancing the budget over economic stimulation.

But obstacles remain for the central bank, and Kim noted that yesterday’s decision was not unanimous.

For the past four months, the consumer price index has been rising about 1 percent a month, prompting concern the country could be at the start of a long-term deflation.

To push inflation to the central bank’s target of 2.5 to 3.5 percent, the BOK would have to loosen up the monetary policy.

Also there is speculation the central bank is cautiously monitoring the political situation as the Park Geun-hye administration has yet to launch its planned government reorganization because of legislative gridlock.