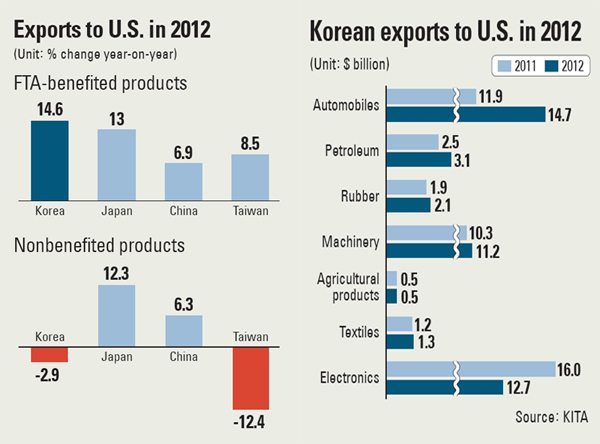 Reports from the government and research institutes concluded that the Korus FTA has successfully taken off - and helped shield the Korean economy against the global slowdown.

Korea maintained its position as eighth largest trader in the world, with trade volume of $1 trillion last year, partly owing to the pact, the reports said.

The Korea International Trade Association (KITA) released yesterday a report praising the Korus FTA for buttressing the country’s export-oriented economy over the past year.

According to the report, Korea’s exports to the U.S. expanded 1.8 percent to $57 billion from March 2012 and February 2013 compared to a year earlier. The country’s imports slid 9.4 percent to $41 billion during the same period.

“Given that the country’s total global exports declined by 2 percent during that time, exports to the U.S. managed to grow nicely,” the report noted.

Korea has maintained its position as the sixth largest trade partner in the U.S. import market, occupying a 2.6 percent share. The frontrunner is China, followed by Canada, Mexico, Japan and Germany.

The U.S. has the world’s largest import market as a single nation, which amounts to $2.3 trillion, the data showed.

Advocates for free trade, like Trade Minister Bark Tae-ho, had claimed that Korea should improve its market presence in the American market by utilizing the Korus FTA.

Korea used to send 21.8 percent of its exports to the U.S. in 2000, but the figure dropped to 10.6 percent as its exports to China and Asean countries rose.

The KITA report emphasized that items that had tariffs cut by the U.S. saw 14.6 percent growth in combined exports after the deal became effective. That growth outnumbered exports from Japan (which grew 13 percent), China (6.9 percent) and Taiwan (8.5 percent), according to the data.

But exports of items that weren’t subject to tariff cuts dropped 2.9 percent.

“It is significant that most auto part exporters are small businesses,” the report said.

The textile industry saw 9.1 percent in exports to the U.S. but that was less than expected.

The Ministry of Strategy and Finance credited the Korus FTA for improving the foreign investment environment in the country.

Inbound foreign investment jumped 113.6 percent to $452.9 billion in the past year, according to the ministry. Foreign investment in both manufacturing and service industries grew 88 percent and 90 percent, respectively.

“The Korus FTA contributed to revitalizing the domestic economy through high-levels of mutual trade and investment expansion,” the ministry said in a report.

However, whether local exporters are fully utilizing opportunities opened up by the trade agreement remains questionable.

According to a survey of 350 exporters to the U.S. conducted by the Korea Chamber of Commerce and Industry (KCCI), 61.2 percent of the respondents said the trade deal had been a boon to their exports to America over the last year.

But nearly 40 percent said the pact has been unhelpful to their exports to the U.S.

Over 62 percent of the respondents said that they had difficulty utilizing the FTA to boost their sales to the U.S. due to a lack of trade experts and the language barrier. The small companies complained that young workers fluent in English are reluctant to work at companies that are small.

The Korus FTA came into effect exactly a year ago today after six years of sometimes difficult negotiations and split public opinion.

The deal was signed in June 2007 and approved by the U.S. Congress in October 2011. It was supplemented in late 2010 with modifications that mostly dealt with the auto industry.

The pact with the U.S. was expected to increase the nation’s GDP by 5.66 percent over the next 15 years and create jobs for 350,000 people. It was also supposed to increase exports to the U.S. by nearly $1.3 billion on average every year.

“The Korus FTA was implemented with the goal of raising competitiveness of small exporters, but only 24 percent of the nation’s exporters are utilizing the FTA, which is very low compared to 50 percent utilization of the NAFTA deal by Canadian and Mexican exporters,” said Myung Jin-ho, a researcher at Institute for International Trade at KITA.

“After the Trade Ministry is merged into the Ministry of Commerce, Trade and Resources, there should be government support to establish one-stop solutions for small exporters to better use the FTA.”

“The Korus FTA did help boost the economy but there are more tasks to accomplish for the economic ties between the two countries to mature,” said Choi Sung-geun, a researcher at Hyundai Research Institute.

According to the report compiled by the institute, bilateral trade tussles may arise as the two countries still have to resolve contentious issues such as the beef trade and the investor-state dispute settlement scheme.