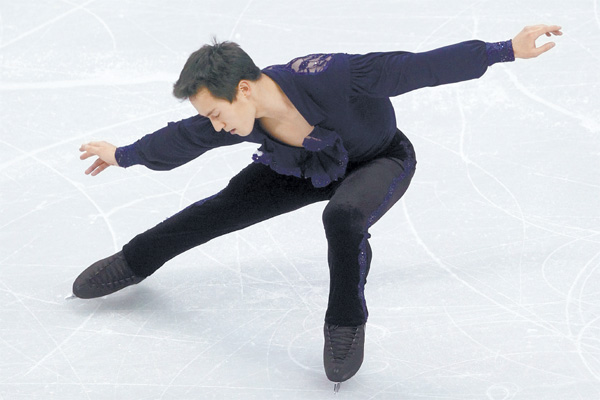 Patrick Chan of Canada performs his men’s short program at the ISU World Figure Skating Championships in London on Wednesday. Chan won the short program with a record score of 98.37.[REUTERS/NEWSIS]

Chan had not performed like a world champion this season but looked every inch a gold medalist during a display that earned a rousing standing ovation from the partisan crowd and a record score of 98.37 from the judges.

After a trying season packed with uninspiring performances, Chan lifted his game for the home fans to demolish the previous mark of 95.32 held by Japan’s Yuzuru Hanyu.

“When you are in an environment like this where it’s full of people and I know they are all behind me and they love me, all I want is to give them back something amazing they are going to remember,” Chan told reporters.

“Going into my last spin I just felt this surge from the ice, through my boots, through my body, where I was so excited because I finally did it on a day that counts in front of a crowd like this.

Chan arrived at the ISU World Figure Skating Championships declaring himself the underdog but could now find himself the skater being chased all the way to the Sochi Olympics if he can produce a similar effort in Friday’s free skate.

Skating to “Elegie in E-Minor” by Rachmaninov, Chan nailed his opening quadruple-toe, triple-toe combination and never let his foot off the gas, leaving the competition in his dust.

Kazakhstan’s Denis Ten was a shock second and will start the free skate almost a massive seven points behind the Canadian despite producing a personal best score of 91.56.

“I knew from the beginning of the week I was able to perform a good short program, but there was still a little bit of doubt when you get to a competition you don’t know what can happen,” said Chan, whose only win this season came at the national championships.

“I wasn’t excited about being in first after the short or new high score, I was just more excited about finally putting out a good program. Finally being able to lay it down on the day that counts.”

Adding to a spectacular night for the Canadian contingent was Chan’s team mate Kevin Reynolds, who recorded the third-best mark of 85.16.

Reynolds proved to the home fans his surprise win at the Four Continents was no fluke. Skating to the thumping beat of the “Chambermaid Swing” that had the crowd enthusiastically clapping along, Reynolds wowed the audience with his high-flying antics.

A bigger jumper who landed five quadruple jumps in his two programs at the Four Continents, the 22-year-old opened his routine with a quadruple Salchow, triple-toe combination and finished with a second quad jump for good measure.

“It’s a bit surprising for me to be here but considering 10 days ago I had a small knee injury and didn’t think I would be able to participate here, to have a skate like this it feels great,” said Reynolds, who best finish at three previous worlds was an 11th place.

The worlds are also something of a home game for European champion Javier Fernandez of Spain, who is coached by Canadian Brian Orser and trains just a two-hour drive away at the Toronto Cricket Club.

Fernandez arrived in London with plenty of momentum and was rated a legitimate contender for the gold but after a botched short skate he finds himself well down the table in seventh and will need to produce a special free skate if he is to get on the podium.

Four-time world champions Aliona Savchenko and Robin Szolkowy turned in a lackluster effort that left them in third place but still within striking distance of a fifth crown.

“Our skating was not as good as the points,” lamented Szolkowy.