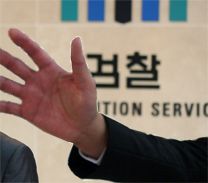 The two investigation officers allegedly received approximately 32 million won ($28,864) in bribes in exchange for preferential treatment during an inspection into the leader of a group of landowners seeking to redevelop real estate in southern Seoul.

The leader of the landowners was investigated for taking bribes in an ongoing case from 2007 to 2009 when he was carrying out a redevelopment plan of around 8,000 apartments.

A small company executive surnamed Kim, who claimed that he served as a middleman between the head of the group and the investigation officers, revealed his involvement in the inappropriate handling of the case to the Seoul Eastern District Prosecutors’ Office.

He testified in 2009 that “I was a middleman between them and, at the request of the man who headed the redevelopment project of Garaksiyoung apartment complex, I tried to throw off the inspection.”

But there was neither a corrective measure against the two officers nor further investigation as to whether the bribery case was thoroughly investigated.

Reporters from the JoongAng Ilbo and Kim requested the Prosecutors’ Office provide a document containing Kim’s 2009 testimony, but the testimony was omitted from the file, fueling speculation that the Prosecution Office attempted to conceal the alleged mishandling of the bribery case.

The Seoul police agency recently announced that one of the prosecution officers received bribes in the form of money and overseas golf tours to Dalian, China while the other was treated at upscale restaurants by Kim.

Kim met the group leader when his company was selected to supply building materials for the renovated apartments. The leader of the group contacted Kim during the summer of 2007, saying he needed someone to help him with the bribe charges against him.

Lee demanded 5 million won from Kim and later asked for overseas golf tours to China. Kim paid all expenses for the trips. The two prosecution officers said they never received bribes and that they only met and had dinner together with Kim.