At festivals, get ready to jam away the summer

At festivals, get ready to jam away the summer 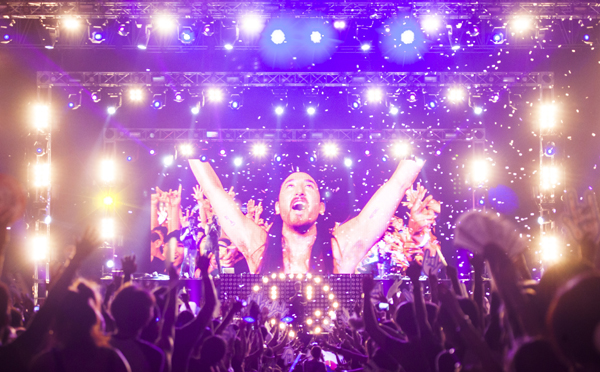 The second edition of Ultra Music Festival Korea will be held at the Jamsil Sports Complex in southern Seoul on June 14-15. Headliners include Armin van Buuren, Avicii and Carl Cox. Provided by the organizer

Preparations are well underway and the countdown is on for upcoming summer music festivals. From electronic music to jazz, fans will delight in the diverse performances scheduled to take place throughout the country.

This year in Korea, the Jamsil Sports Complex will be vibrating to the beats of the best electronic dance music over two days in June. The first acts named to the lineup include EDM super-Dutch trance man Armin van Buuren, Swedish DJ and record producer Avicii and champion of techno Carl Cox. They are ready to “hump up onto their main stages and bring this sweaty, pheromone-soaked festival of dance to a furious, fist-pumping climax,” according to organizers.

Discussions with other potential performers are still ongoing. The 2012 bacchanalia featured Tiesto, Carl Cox, Skrillex, Steve Aoki and many more.

“Ultra Korea 2013 will have a major impact locally and beyond. There are a lot of incredible plans and surprises lined up for everyone attending the second edition of this gargantuan event,” said an official from the organizing committee. “We’re gearing up to make EDM history and do something that no electronic music festival has ever done in Asia; this is a unique concept and differs from anything ever done.”

Ultra Korea 2013 will kick off for two days on June 14 at Olympic Stadium, Assistant Stadium and the outdoor parking lot of the Jamsil Sports Complex in southern Seoul. All early-bird tickets are sold out, however regular tickets went on sale on Thursday through various outlets including ticket.interpark.com. With the current presale discount, one-day tickets are 90,000 won ($81.04) and two-day tickets are 120,000 won. For more information, call 1544-1681 or visit the event’s Facebook page at www.facebook.com/umfkorea.

Left: At this year’s Jarasum Jazz Festival, visitors can enjoy Korean-style barbeque while listening to music by renowned musicians from around the world. Provided by JIJF. Right: This year’s Rainbow Island Music & Camping Festival focuses on local musicians, including Nell, Day Break and Clazziquai. Provided by VU ENT

It may sound strange to picture jazz and Korean BBQ together, but the Jarasum Jazz Festival organizing committee decided to turn an ordinary jazz festival on an island into a special event that can be enjoyed by families.

Marking its 10th anniversary this year, the jazz festival has been held annually on a small island in Gyeonggi.

To make the 10th event a little more special, organizers decided to hold the festival a couple of months earlier than usual in May so that “families can enjoy good food and good music while feeling the spring breeze.” Visitors can have BBQ while watching the live performances as the organizers will also provide food and a BBQ kit by reservation.

“As far as I know, there are other festivals being held on the same day as the Jarasum R&B Festival, however I believe those who want to enjoy a slow-paced weekend listening to jazz and eating delicious food will definitely be attracted to our festival,” said Hahn Jai-kyung from the organizing committee.

If you are a fan of camping and pop music, then don’t miss the annual Rainbow Island Festival on Nami Island in Chuncheon, Gangwon. The privately owned location, which became famous through the 2002 TV drama “Winter Sonata,” prohibits visitors from camping except during the festival.

Last year’s event attracted thousands of Koreans as singer-songwriter Jason Mraz performed on the first evening of the two-day festival.

Although Mraz is coming to Seoul for a concert on May 17, he won’t be joining the festival this year, but organizers said they’ve added a day and included even more artists such as Nell, Day Break, Jung Jae-hyung, Clazziquai and Idiotape.

The Rainbow Island Music & Camping Festival will be held June 7 to 9. Currently, one-day tickets cost 88,000 won, while three-day tickets are 121,000 won. Prices will increase as the festival approaches to a maximum of 143,000 won for a three-day ticket. Camping passes cost 55,000 won for three people and 77,000 won for six people including equipment. For more information, visit www.rainbowfestival.co.kr.

Left: Metalfest, the largest metal music festival in Korea, has been revived after 12 years. It will be held on May 9 at Olympic Hall, southern Seoul. Provided by Access ENT. Right: This year’s Seoul Jazz Festival will feature international musicians ranging from Ramsey Lewis and Mika to Damien Rice and Kings of Convenience. Provided by Private Curve

Metalfest 2013 is set to jam in Seoul this May. Last held in Korea 12 years ago, it has finally been revived thanks to rising demand.

Slash, the “god of guitar” after Jimi Hendrix as Time magazine put it, will headline the festival. He is better known to Koreans as the guitarist for Michael Jackson when he came to the country to perform in 1999 and also goes by the name Saul Hudson. His first solo concert in Korea three years ago was sold out, so big crowds will likely turn out this time as well.

According to the organizer, Slash, who owns at least 100 guitars, will “let Koreans understand why he’s the world’s top rock guitarist through the festival.”

Next to Slash, American alternative metal band Deftones will also perform at this year’s Metalfest.

As for the Korean line-up, rock band Yellow Monsters, composed of drummer Choi Jae-hyuk, bassist Han Jin-young and vocalist Lee Yong-won, are on the schedule. They’ve released two albums so far and have held 200 concerts a year across the country.

The first day of the festival on May 17 will be headlined by Ramsey Lewis Electric Band with Philip Bailey. Known as a legendary jazz pianist, Lewis has long straddled the boundary between pop-oriented jazz and pop music.

In 2011, he released his 80th album, reimagining his favorite tunes including songs by Stevie Wonder, and Earth, Wind & Fire.

The “pop genius” Mika will also perform on the first day followed by the Parov Stelar Band, Rodrigo y Gabriela, Maximilian Hecker and many more.

As for the Korean lineup, it may be strange to see a supermodel included as an artist at a jazz festival, but Jang Yoon-ju, who writes songs as a hobby, will collaborate with artist Pudditorium on guitar.

On the second day, Irish singer-songwriter Damien Rice and indie folk-pop duo Kings of Convenience from Norway will headline.