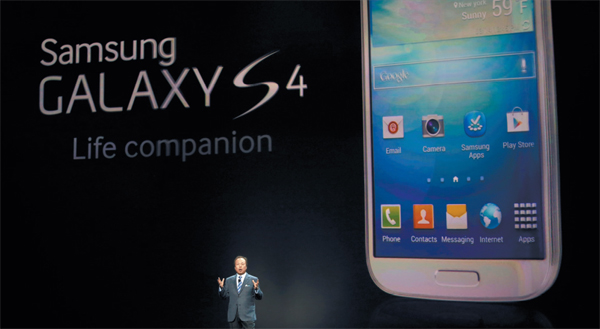 With as much hoopla as it could summon, Samsung Electronics yesterday unveiled its next flagship smartphone in New York, showing off a slew of new technologies - probably too many - to help the Galaxy S4 against its biggest rival, Apple’s iPhone 5 and the upcoming 5S.

As has been widely rumored for months, the new Android-powered device has eye-tracking and gesture control capabilities. The world’s top smartphone producer has also enhanced the sensors on the screen so users no longer have to remove gloves to use their phones.

The S4 has a 5-inch full-HD Super Amoled display, 0.2 inches larger than its predecessor S3, 0.5 inches larger than Samsung’s “phablet” the Note 2 and an inch bigger than the iPhone 5. It’s slimmer and lighter than the S3 by 0.02 inches and 0.1 ounces, relatively minor differences. The rounded corners of the S3 have been made edgier to meet the latest trend of phones taking more rectangular shapes.

Depending on the market, the phone will either run on Samsung’s new Exynos 5 Octa processor, which has up to twice the processing speed compared with its quad-core counterpart and uses less energy, or Qualcomm’s existing quad-core processor. The former will be used in countries further along in fourth-generation long-term evolution technology, like Korea.

Both rear-facing and front-facing cameras have enhanced resolutions - 13 megapixels and 2 megapixels - and the battery is the most robust, with capacity of 2,600 mAh, of all smartphones Samsung has released so far. The company says it is 1.8 times the power offered by the iPhone 5, which is notorious for its battery running out of juice.

In the presence of 3,000 members of the press and Samsung partners at Radio City Music Hall Thursday evening local time - the biggest launch yet for the Korean tech bellwether, which was also streamed live on YouTube - J.K. Shin, president and head of the IT & Mobile Communications Division at Samsung, kicked off the hour-long event with a brief introduction of the device’s specifications. He mentioned “innovation,” “human” and “experience” several times during his presentation.

“All the innovative features of the Galaxy S4 were developed based on the insights and needs we found from our consumers all around the world,” he said. “Following the successful Galaxy S series, this phone is yet another great proof point of people-inspired innovation.”

He said the phone will start selling before the end of June through 327 mobile carriers across 155 countries.

Then followed a demonstration of the phone’s new features via a bizarre performance unprecedented for a tech gadget debut: A four-scene Broadway skit with dozens of performers. 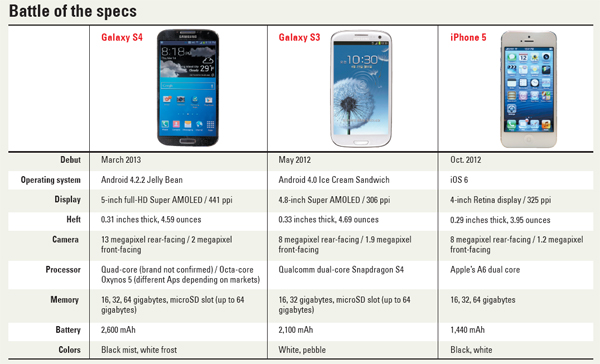 The first batch of technologies introduced related to eye and movement recognition, functions that had been rumored for weeks. With “Smart pause,” the phone stops playing videos when its user looks away from it, and resumes when his or her gaze returns. “Smart scroll” lets a user scroll a browser or e-mails up and down without touching the screen but by tilting it back and forward.

A “dual camera” function allows simultaneous use of both front and rear cameras, thus putting together
the user and the subjects in the same photo frame.

A “sound & shot” function makes it possible for a user to record sound and attach it to a photograph. A “group play” function connects other Galaxy S4s, allowing people to play the same music and create a surround-sound stereo system, share photos or documents, and play video games together.

The new phone received mixed response from early reviewers. While some lauded Samsung’s efforts at improving software capability, others expressed disappointment over the level of innovation in the hardware.

“We are sure that Galaxy S4 will become a ‘great hit’ product, based on which we predict Samsung will show an excellent performance from the second to fourth quarter,” said Park Young-joo, an analyst with Woori Investment & Securities. He cited the upgrade of the S4’s application processor to an octa-core, improved screen quality and increased demand from Apple users who were disappointed with the iPhone 5.

He expects the S4 to sell at least 44 million units in the second and third quarters, while it took 50 days for the S3 to sell 10 million.

Samsung, according to Jefferies analyst Peter Misek, is manufacturing some 100 million units of the S4 on upbeat projections for the new gadget.

Samsung’s Galaxy S phones, the company’s high-end smartphone model, have accumulated sales of 100 million units since launching in 2010 and the S3 is estimated to have sold over 60 million since last May.

By comparison, Apple sold more than 125 million iPhones in its last fiscal year alone but sales of the iPhone 5, according to parts suppliers, are decelerating faster than expected.

Some foreign media analyze that Samsung appears to have focused more on the software.

Forbes wrote: “S4 itself is - with most smartphone announcements these days - the kind of evolutionary upgrade that will have fans oohing and ahhing over the subtle refinements while leaving regular folks a bit befuddled what all the fuss is about.”

Galaxy S4’s release schedule is expected to be speedier than before. Samsung unveiled the S3 in London in early May 2012 and launched sales of it in Korea in early July, but the S4 could be sold here in April at the earliest, according to a source with SK Telecom, Korea’s top carrier.

“Given LG’s Optimus G has been selling much better than expected, Samsung is hurrying to release the Galaxy S4 as early as possible,” said the source, who asked not to be named. An SK Telecom spokesman refused to comment.

Samsung’s other phones for release this year includes a third version of the Galaxy Note “phablet” and a device using the Intel-backed Tizen operating system.

Apple is rumored to release the iPhone 5S, the follow-up to iPhone 5, in June at the earliest.

Separately, Samsung announced yesterday that it would mass produce the Oxynos 5 Octa processor starting in April.

It has been devised for both smartphones and tablet PCs.