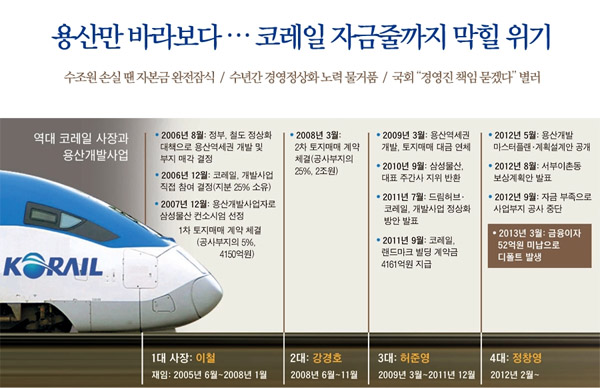 All 30 stakeholders of the Yongsan International Business District development project gathered at a meeting yesterday to discuss measures to normalize the faltering project.

Korail, the largest stakeholder, proposed a plan to put the project back on track at the meeting. The plan includes providing 260 billion won ($234 million) in capital, abandoning previous agreements among stakeholders, canceling contracts of some landmark buildings, reforming Dream Hub Financial Investment and changing all project procedures.

The railway corporation decided to collect opinions of 30 private investors by next Friday. If they agree to the new plan, Korail will confirm the plan on April 1.

“Korail expresses regrets about the default of project executor Dream Hub Financial Investment on Tuesday, caused by failing to pay 5.2 billion won worth of interest on the 200 billion won asset-backed commercial paper,” the company said in a statement. “The company will do its best to normalize the project soon and compensate the residents of Yongsan.”

The Yongsan project, first proposed in 2006, was deemed to be Korea’s largest property development project, turning the area - specifically the 566,000 square meters (140 acres) of land on Hangang-ro 3-ga in Yongsan District, central Seoul, which was used to store trains by Korail - into a large international complex of offices, shopping malls, hotels and apartments. But a succession of failures among the partners has derailed the project.

Korail, SH Corporation on behalf of the Seoul City Government and representatives from the project’s construction investors will run a task force team until December to re-establish a plan for the project, reflecting changes in the real estate market.

On Thursday, Korail declared emergency management in order to tackle the biggest crisis in its history. The state-run railway operator is likely to face massive losses from the collapse of the Yongsan project. Since the government has 100 percent ownership of Korail, the losses could affect the general public. Under emergency management, Korail said it will conduct an organizational restructuring. It will trim unnecessary businesses and no new businesses will be launched.

According to the Ministry of Land, Transport and Maritime Affairs, Korail would have to return 2.7 trillion won that it earned from selling some of the land in Yongsan. The Land Ministry plans to raise the ceiling on Korail’s corporate bond issuance in order to prevent it from suffering from a liquidity crunch.

“The ministry will push for reforming the railway corporation law to increase the bond issuance limit to four times higher than its capital,” said Koo Bon-hwan, a ministry official.

The limit is currently set at twice the amount of the capital. Other public corporations normally can issue bonds four times as much as their capital.

“The government will only help on the condition that Korail should make earnest efforts to restructure itself,” Koo said. “If Korail is able to recuperate about 3 trillion won from the project, it will be able to issue 12 trillion won worth of bonds.”

However, reforming the railway corporation law will never be easy at the National Assembly. Opposition party lawmakers are accusing former CEOs and executives of Korail of burdening the company with huge debt.

If revision of the law is delayed due to lawmakers’ opposition, Korail will likely face a liquidity crunch.

Korail hasn’t posted a surplus in its railway business for the last eight years after it was converted from a government agency to a public corporation in January 2005. The railway unit has so far accumulated 1.3 trillion won in deficit, according to the Land Ministry.

Despite the deficit, the ministry won’t allow Korail to raise fares.

“Compared to fares of other public transportation, train fares are pretty high,” Koo said. “A fare hike could drive out passengers.”