Neurologist is recognized for research on dementia

Neurologist is recognized for research on dementia 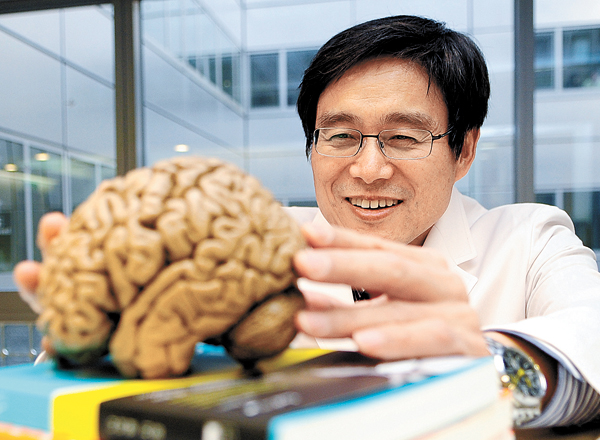 Soon after entering medical school at Seoul National University, Na Duk-lyul became fascinated with the human brain. While his fellow students often complained about neurology class, it was Na’s favorite.

So sure enough, when it came time to choose a speciality, he chose neurology at a time when most physicians elected to enter orthopedics, pediatrics or plastic surgery.

And during his tenure as a resident, he again chose to enter a field neglected by most of his peers.

He began to study cognitive neurology and dementia after meeting patients who could only draw half of a clock or had trouble speaking and understanding. Back then, neurologists mainly focused on strokes and seizures.

He persisted in the field for 17 years, even over objections from his wife, a pediatric psychiatrist who wanted her husband to work in a more mainstream speciality.

For his work, Na, who is now a professor of neurology at Sungkyunkwan University, received the Bayer Prize in Clinical Medicine on Wednesday.

The award, presented by the Korean Academy of Medical Sciences and German medical firm Bayer, rewards those who have conducted outstanding research that has raised the quality of Korean medicine. In the previous eight years, the winners were always either surgeons or general practitioners.

“I never would have thought a doctor specializing in dementia would receive this award,” Na said.

But his peers think he deserves the award more than anyone else.

“Na has made significant contributions to medicine in terms of prevention and diagnosis of dementia,” said Kim Dong-ik, president of the Korean Academy of Medical Sciences.

His biggest achievement so far is the development of the Seoul Neuropsychological Screening Battery (SNSB), used to assess and monitor cognitive impairment in dementia patients. He built the tool after finishing his studies at the University of Florida in 1994.

Previously, there was no adequate assessment tool of that type in Korea, but now the SNSB is the local standard.

Na has written more than 100 papers based on the tool, though his total number of publications is at least 200 so far.

Outside of the hospital and laboratory, he wrote two books about dementia for the general public and also developed a game to prevent dementia.

Na said his attitude about patients and their guardians completely changed after he took care of his mother-in-law, who had dementia. He now better understands the pain of his patients’ families.

But ultimately, Na’s dream is to find a cure before he retires, which will probably be in about 10 years, the 57-year-old said.