Arirang host Brian Rhee chooses to take his own path

Arirang host Brian Rhee chooses to take his own path 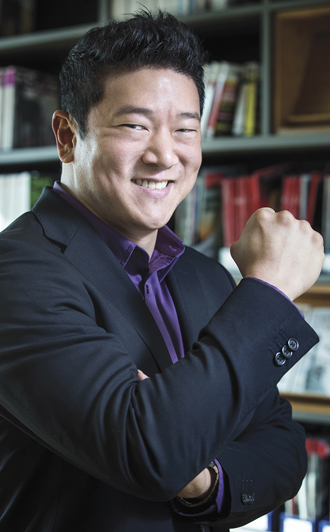 Brian Rhee describes himself as a “rebel” among his prominent family members as he lives a life that pleases himself. By Park Jong-geun

Brian Rhee has an impressive family background. His older sister is Michelle Rhee, former Chancellor of Washington, DC, while his brother Erik Rhee is a Columbia University graduate who now owns a real estate company after working as an attorney in the United States.

As his parents focused their attention on the two, Brian says he was free to do as he pleased.

He entered Ohio State University to play volleyball, but dropped out after getting a knee injury. He then moved to the University of Colorado to study English literature but later quit.

The 42 year-old came to Korea in 1998 to visit his grandmother in the hospital. At the time, it occurred to him that he could be an actor in Korea. He started learning Korean but his not-quite-perfect Korean discouraged him from being an actor.

Tapping into his native English skills, he has since been involved in various English education programs on EBS and Arirang.

The JoongAng Ilbo sat down with Rhee to discuss his colorful life and his relationship with the former Chancellor.

Q. You give a different impression from your sister Michelle Rhee, who looks very strong and vibrant.

A. We always stay in touch with each other. Michelle has recently relocated to Sacramento, California after marrying Kevin Johnson, the mayor of the capital city [and former NBA star]. She got a lot of offers from regional education bodies after serving as Chancellor of Washington, DC, public schools. But she turned down the offers and founded an advocacy group, Students First. As a young girl, she was very purpose-driven and energetic. I think the chancellor position doesn’t fit her because she has too strong of a personality. If the congress members are 20 minutes late, she will just leave in 20 minutes. Others could wait for two or three hours.

You have been involved in the education field. What do you make of Korean education?

The problem with U.S. education is that they don’t educate enough, but Korea places too much emphasis on education. Kids are stressed out and frustrated because of the heavy pressure. I once ran an after-school cram school to teach English. I was shocked when I saw an elementary school kid say “I want to die.” Parents should know that, unlike adults, their kids don’t have enough capability to endure their own stress. My sister can’t understand why I am so worried about Korea’s education-obsessed approach. She might think that such an attitude is better than that of the U.S., which pays less attention to education.

How do you recommend people become more proficient in English?

It takes a while to be fluent in English. You need to build a solid foundation, learning step-by-step, but Korean parents focus too much on grammar and vocabulary to get a good test score.

I am now into mixed martial arts. Mixed martial arts is attractive because it is very intuitive. It is linked with ancient people’s instinct to hunt. The sport also has a masculine appeal. But my income has reduced because it’s hard to do regular TV programs. I frequently go abroad [as a manager of fighter Jung Chan-sung].

I can’t say what I am going to do. The only thing I can say is that I will keep doing what I want to do. Even if that means less money, I want to do something that is good for me and others.