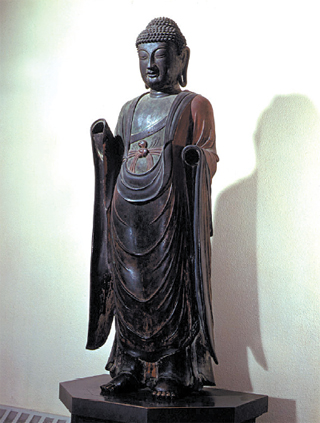 Originally located at the Baengnyul Temple on Mount Soguemgang, north of Gyeongju, this gilt-bronze Buddha was moved to Gyeongju National Museum in 1930.

Experts say this representation has lost some of the tenseness seen in images from the mid-8th century.

The robe covers both shoulders and hangs down from the arms but still reveals the shape of the shoulders. The skirt is knotted in the center of the torso. In the front of the body the folds of the robe are portrayed in U-shaped schematic patterns.

The lower half of the body is represented gracefully, with the heavy skirt flowing over the abdomen, which protrudes as a result of the statue’s backward-leaning stance.

The two hands are missing, but judging from the wrists the right was likely raised up to show the palm and the left probably held a medicine vessel or beads.

Some experts find the work rather one-dimensional but it still exhibits good proportions and molding technique.