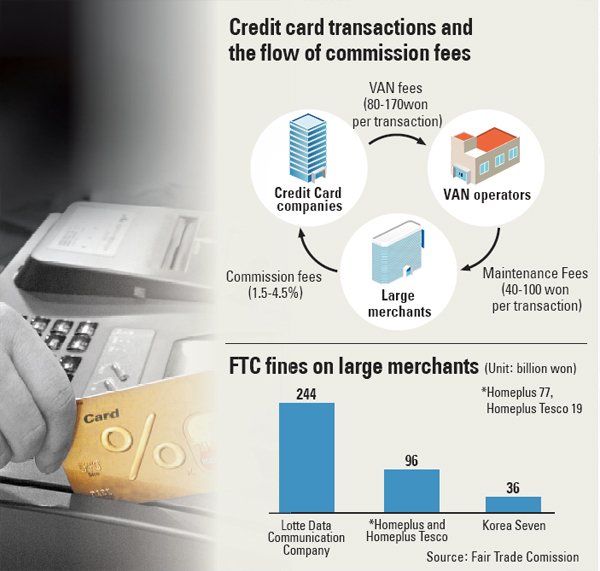 The Fair Trade Commission recently imposed fines on large retailers for charging high fees to companies you’ve never heard of but whose services you use every day: VAN companies.

This is a three-party arrangement: The VAN companies, the merchants and the credit card companies. What consumers don’t realizes is that there are many VAN service providers and competition among them is overheated.

VAN operators receive transaction fees from the card companies and pay commissions to large merchants in the name of computational maintenance costs as a kind of rebate or to snag contracts with them.

Large merchants took advantage of the fierce competition by demanding so-called “maintenance fees” per transaction from the VAN companies.

To stop this vicious circle, the FTC announced March 5 that it had imposed a total of 376 million won ($339,528) on Lotte Data Communications Company, Homeplus and Korea Seven for unilaterally raising and coercing VAN fees or unfairly changing bid conditions to squeeze illicit profits from VAN operators.

However, the effectiveness of the FTC’s penalty is controversial as the amount was less than one tenth of the fees that merchants unfairly pocketed.

According to the FTC investigation, Lotte Data Communication, an SI company that manages and operates the VAN-related businesses of Lotte Group’s 16 affiliates, pledged to allocate 80 percent of the credit card transactions to the bidder who was willing to pay the highest fees when it was selecting a VAN operator for Lotte’s affiliates such as the Lotte Department Store and Lotte Mart in September 2011.

This way, the company reportedly pocketed illicit profits of 384 million won since the end of 2011 until this January, according to the FTC.

Last January, Homeplus and Homeplus Tesco unilaterally raised the so-called “maintenance fees” received from VAN operator NICE I&T, even though it was during the contract period. It pocketed 360 million won, according to the FTC.

The company gained an additional fee of 4.5 billion won by forcing the NICE I&T to change fees if it wanted to keep the contract.

The FTC’s fine was only 7 percent of the unjust profits made by the merchants.

The current Fair Trading Act states that the upper limit of penalties in trade to be 2 percent of the related revenues.

Experts point out that the law should be amended.

“We have imposed fines close to the upper limit set by the law and it is debatable whether we should consider the entire fees merchants have obtained as unjust enrichment,” said an FTC official.

Meanwhile, the credit card industry is welcoming the sanctions on the merchants by the financial authority, although most agree that the punishment was a mere slap-on-the-wrist.

Credit card companies were also victims of the merchants as they paid higher fees to VAN operators. Card companies pay an average of 12 won per one credit card transaction as fixed payments.

But an analyst said that since there are many stakeholders in this issue, the negotiation to lower VAN fees that card companies pay will not be easy.

“Although there is room for lowering VAN fees, it will be difficult to stamp out the whole flow chart of commission fees of the large retailers, credit card companies and VAN companies,” said a researcher at the Korea Institute of Finance.