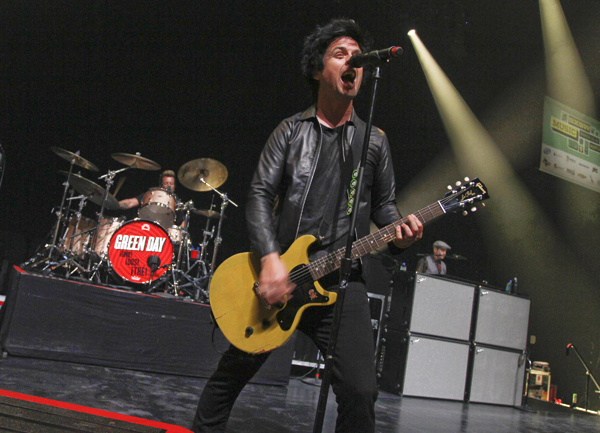 AUSTIN, Texas - Green Day isn’t talking about the recent rocky past, but they’re playing like the old days.

An upbeat Billie Joe Armstrong whipped the Grammy-winning punk trio through an ear-splitting two-hour show Friday night at the South by Southwest Music Festival, returning to the stage for only the second time since Armstrong emerged from a rehab stint that caused the band to postpone an arena tour.

The 41-year-old Armstrong made no mention of his problems with substance abuse while playfully bantering with a nearly sold-out crowd at Moody Theater and ripping through a 25-song marathon. The energetic set mixed new rockers from the “Uno!’’ “Dos!’’ “Tre!’’ trilogy the band rolled out last winter and old favorites like “Longview’’ and “American Idiot.’’

“This ain’t no [expletive] cafe!’’ Armstrong told the crowd right out of the gate. “Get crazy!’’

Armstrong’s good spirits were a sharp contrast to his profane meltdown at the iHeartRadio Music Festival in Las Vegas in September, when he complained the band’s time was being cut short and smashed his guitar. Two days later, Green Day announced Armstrong was headed to treatment for substance abuse.

His cheery chatting with the audience at the showcase SXSW gig did include one moment when, while apparently encountering a hiccup with his microphone, Armstrong quipped, “I wasn’t even on drugs,” while laughing.

Green Day is among the marquee acts at SXSW this year along with Justin Timberlake, Dave Grohl and the Yeah Yeah Yeahs.