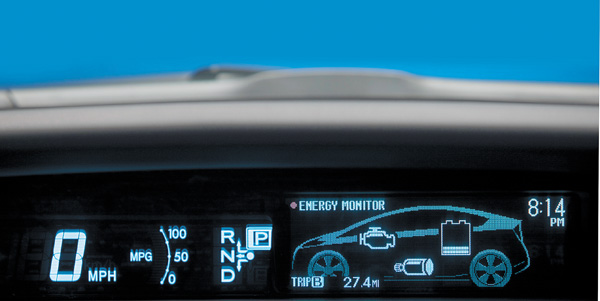 The dash display readout for a Toyota Prius [JoongAng Ilbo]

Sales of hybrid vehicles spiked worldwide last year and the competition among global automakers, including the nation’s largest automaker Hyundai Motor, is heating up.

According to a report released by the Korea Automotive Research Institute (Kari) last week, global sales of hybrid vehicles, which are powered by an internal combustion engine and one or more electric motors, surpassed 1 million units for the first time last year.

The report said that more than 1.536 million hybrid vehicles were sold worldwide in 2012, which is a 77 percent increase from 2011.

The rising trend was led by the world’s No. 1 automaker Toyota, which produced 75 percent of the total hybrid vehicles sold worldwide. Last year, the Japanese automaker sold 1.15 million hybrids, nearly double the 584,000 units sold in 2011. 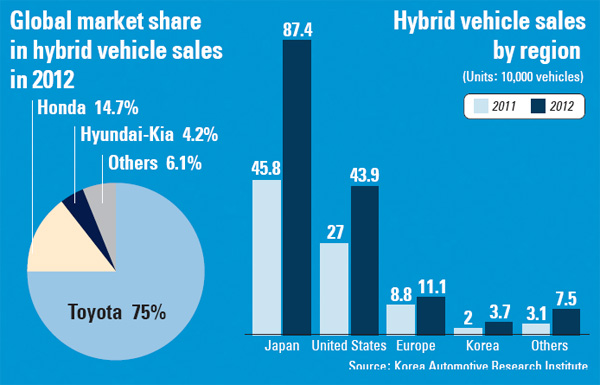 Its iconic Prius, the world’s first commercially produced hybrid, topped the sales with 442,000 units, while the Prius C, which has a smaller engine, was second with 309,000 units. The Prius C, which has 1,500cc of engine displacement, has the best fuel efficiency among hybrids at 35.4 kilometers per liter (83.3 miles per gallon).

Another Japanese automaker, Honda, was second in global hybrid sales after taking 14.7 percent of the market share. Its sales in 2012 grew 14 percent year-on-year.

Accumulated sales of their first hybrid models - Avante (known as the Elantra overseas) and Forte - surpassed 100,000 units since first being introduced in 2009. The two automakers expanded their presence by releasing two mid-size hybrid models since May 2011. The combined sales of the Hyundai Sonata and Kia K5 (Optima) hybrid models have reached 37,000 units, up 83 percent from 2011.

Kari said that this year’s global hybrid sales will be 20 percent more than last year as automaker competition heats up.

Furthermore, when the market size gets bigger, economies of scale will apply and reduce the retail price of hybrid models, which will also attract more drivers toward hybrids.

“Hybrids are getting attractive to consumers as their price becomes no different than gasoline powered cars, while their fuel efficiency is emphasized,” said Kang Dong-wan, a researcher at Kari. “As development of electric or hydrogen-powered vehicles are sluggish, the growth of hybrids will continue.”

As the hybrid market enters a new stage, automakers are working harder to increase its competitiveness. Especially, Japanese automakers, which currently account for 90 percent of global hybrid sales, are expected to further push its sales as the Japanese yen weakens.

Toyota already revealed its future plans with hybrids last September. It aims to roll out 21 new or redesigned gasoline-electric powered vehicles by the end of 2015.

In the long term, the Japanese automaker aims to have a hybrid option for each model in its lineup.

Automakers from the United States and Europe are focusing more on plug-in hybrid electric vehicles (PHEV), hybrids which use rechargeable batteries that can be charged by electric socket, according to Kari.

Hyundai has been trying to expand its presence in the United States.

The automaker has been offering a 10-year or 100,000-mile warranty for its auto parts and batteries for the Sonata Hybrid, Hyundai’s only gas-electric hybrid vehicle sold in the U.S. However, it is rumored that the automaker may release a hybrid version of its popular sport utility vehicle Santa Fe in the future.

“Nothing yet has been determined about the release of an SUV hybrid,” an official from Hyundai said. “If we release a hybrid SUV, it will probably use the Blue Hybrid System that is used in the Sonata, but it will need a better power system because the size of the car is bigger.”

Hyundai’s Blue Hybrid system in the Sonata pairs a 2.4-liter four-cylinder engine with a 10.5 kilowatt hybrid starter generator, which is a 35 kilowatt electric motor, and a 47 kilowatt Lithium Polymer battery pack. This setup delivers a total of 206 horsepower and scores 38 miles per gallon in combined fuel efficiency.

Since China, the world’s largest auto market, is also showing interest in hybrids with government support, industry observers say a hybrid war is about to start.

“Just like any other vehicles, the future of the hybrid auto market will ask for diversity of the product, price and new models,” Kari said in its report. “Automakers should have an integrated strategy on hybrids that uses the same process of other mass-produced models’ planning, production, sales and marketing.”