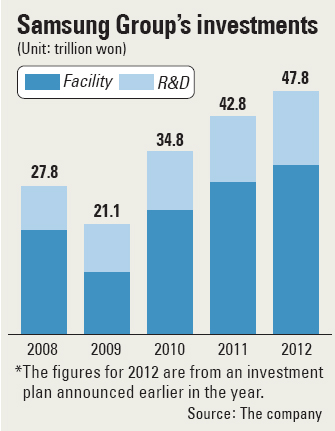 Samsung Group last week announced its recruitment plan for the year. However, the nation’s No.1 conglomerate has remained silent on its investment plans unlike in the past.

Even during Friday’s shareholders meeting Kwon Oh-hyun, CEO and vice chairman of Samsung Electronics, only said that the group’s flagship company will be flexible in investments according to the rapidly changing market situation.

The group wasn’t clear in advance whether it was going to announce its investment plan and a lot of speculation has arisen about the decision.

One of the leading rumors is that Korea’s No. 1 conglomerate is waiting until the new Park Geun-hye administration organization is settled.

Many companies, including Samsung, had been holding back on investment decisions.

“It’s not easy for conglomerates to design an investment plan when the government’s target for each industry hasn’t been decided yet,” said an official in the business community requesting anonymity.

“The size of planned investments tend to be for show for the political community and the general public,” said an industry insider.

At the beginning of last year, Samsung Group announced it would make record investments of 47.8 trillion won ($43 billion). However, it’s believed that investments weren’t that high.

Moreover, Samsung has nearly completed the 30 trillion won investment in the semiconductor business it intended for the last three years. Therefore future investment is bound to look smaller. Another rumor is that Samsung no longer sees a reason to announce its investment plan every year.

“Investments are made frequently and need to be made smartly,” said a Samsung official. “From a strategic standpoint, announcing how much the company will invest in a certain business area every year is inefficient.”

The official added that for a company that needs long-term business strategies, announcing investments on annual basis is meaningless or even dangerous since such announcements exposes the company’s strategies to competitors. Since last year there have been signs that the conglomerate may no longer disclose its investments plans. The group, through its research institute, projects the following year’s economic growth, foreign currency exchange rate and crude price outlook around October. However, it didn’t disclose such projections last year.

“As it could create unnecessary misunderstandings, we decided to use the [reports] for internal use,” a Samsung official said.