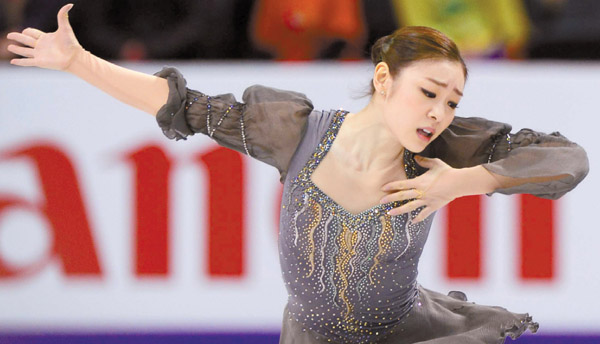 Kim Yu-na performs during the free skate at the ISU World Figure Skating Championships in London, Ontario. Kim, the 2009 champion, won her second title in her first appearance at the worlds in two years. [REUTERS/NEWSIS]

Kim Yu-na completed her return as Queen of the Ice with her second World Figure Skating Championship yesterday, Korean time, after putting up a near flawless performance that left defending champion Carolina Kostner a distant second more than 20 points behind.

The 22-year-old Korean received 148.34 in free skate, the highest among 24 finalists at Budweiser Gardens in London, Ontario, for a combined score of 218.31. Kim also won Friday’s short program with a score of 69.97.

“I expected a good score as I did well, but I didn’t expect it to be as high as this,” Kim said after winning the world title, her first since the 2009 event. “I had done my best in preparing for the free skate.” 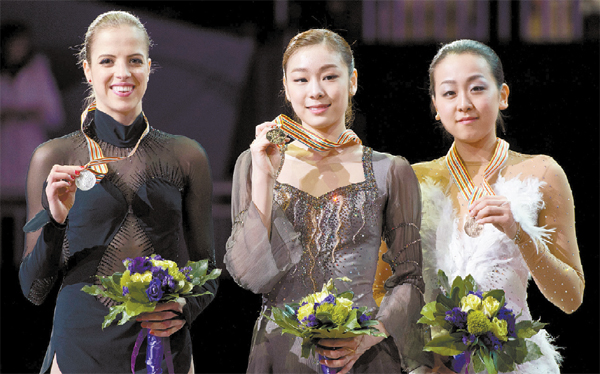 It was Kim’s second-highest point total and the second-highest ever in women’s figure skating. Kim holds the world’s highest mark, 228.56, which she set at the Vancouver Olympics. She earned 150.06 points in the free skate in Vancouver.

Only four other times did she receive more than 200 points, two of them since her return from a 20-month break, raising hopes that she can defend her Olympic title in Sochi, Russia, next year.

Kim sat out competitions at home and abroad since her runner-up finish at the 2011 worlds in Moscow, triggering the speculation of her imminent retirement.

She broke her silence last July, saying the Sochi Games would be her final competition.

The victory in Canada is a big confidence boost ahead of the Sochi Olympics, she said.

Since her return, she said, she tried not to not think so much about people’s expectations during training and competitions. “I felt comfortable during practices,” Kim said.

“And the competitions also had good results, so I’ve got some a bit of motivation [to defend the Olympic title],” she said. “I will keep my heart light ,but will give my best in preparation.”

Kim entered the worlds as one of the favorites after winning the NRW Trophy in Dortmund, Germany, with a then season high score of 201.61 in December. Although it was a second-tier event, she competed to get the minimum points needed qualify for the worlds. She continued to impress, winning the Korean national championship in January with a score of 210.77.

Kim said her performance at the national championships in particular helped her to regain confidence.

“I had rarely done a clean performance at the senior stage,” Kim said yesterday. “Everybody feels burdened by the free skate due in part to the physical requirement. The result this time, I think, will be a great help for me.”

If she wins a gold medal in Sochi, she would become only the third figure skater to successfully defend the ladies’ Olympic title. Sonja Henie of Norway won the three straight Olympics starting in 1928. Katarina Witt of East Germany won the Olympics twice in 1984 and 1988.

At Budweiser Gardens, the audience was on its feet long before her final spin, and cheers erupted when her scores were posted.

No female skater has had a run quite like Kim from 2009 through the Vancouver Olympics. She won all but one competition, usually in breathtaking fashion. While most Olympic champions make a quick exit, Kim stuck around, finishing second at the next two world championships. But she stepped away following the 2011 competition.

Figure skating is meant to be a blend of art and athleticism, and Kim didn’t just feel her music from “Les Miserables,” she was part of it.

With each soft tilt of her head, she brought back memories of the little girl who began skating for the pure love of it, before medals or titles or the expectations of an entire country and sport ever entered her mind.

At 25 and with more expressiveness than most actresses, Kostner is one of the few skaters who can do “Bolero” justice.

Fixing the judges with flirty looks, extending her fingers oh so sharply and enticing the audience with a come-hither sway of her hips before beginning her footwork, she sent the arena temperature climbing.

Even a popped triple loop and a nose bleed that forced her to wipe away blood during a spin couldn’t spoil the sultry performance.

“It was not easy because the blood was just running out of my nose through the whole program,” she said. “It’s an important lesson that I just had to learn here and accept.”

The only thing to spoil the mood came in the final seconds, when she took a hard fall on a triple salchow.

“For me, coming here, I didn’t really know what to expect,” said Kostner, who skipped the Grand Prix season. “Now I can go home with a medal. It’s just such a great feeling. Last year, I reached one of my biggest dreams. I think before I had already given up. So this year I just felt I was able to live a part of it. I’m just so honored to be here.”