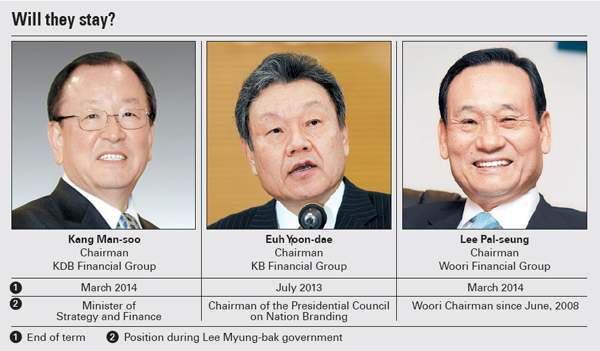 With Kwon Hyouk-se, former Financial Supervisory Service governor, abruptly stepping down from his post last Friday, speculation is growing in the financial industry that other public institution chiefs may tender their resignations to pave the way for the Park Geun-hye administration to conduct state affairs.

“Besides the FSS governor, there have been no other financial institution chiefs who have expressed their intention to resign,” said an official from the Financial Services Commission yesterday. “Currently, we are mostly focused on preparing for the confirmation hearing [of FSC chairman nominee Shin Je-yoon].”

Shin, first vice minister of the Ministry of Strategy and Finance, was nominated by Park to lead the country’s financial regulator formerly headed by Kim Seok-dong. Shin’s confirmation hearing is scheduled for today.

Last Thursday, the Board of Audit and Inspection announced the results of audits of the KDB, Export-Import Bank of Korea, Korea Express and Korea Securities Depository. The agency is also expected to announce the audit outcome of Woori Financial Group, while KB Financial is currently being audited by the FSC. Among audited institutions, KDB was the hardest hit, suffering massive losses due to high-interest personal savings products to attract more customers. The state bank was also found to have misappropriated operating profits and given out incentives to employees.

The audit outcome added to growing speculation of a major reshuffling of financial institution chiefs, with some insiders saying the audit announcement shows the new administration is putting intense pressure on KDB head Kang and others to resign.

In a recent interview, however, Kang remained firm that he would hold onto his position. “It is only right for a public servant to take responsibility [of the post] until the end [of the term],” he said.

Kang, former finance minister in the Lee government, was appointed KDB chief in 2011. His term ends in March 2013, as does that of Woori’s Lee. The official term for Euh, chief of KB Financial, ends in July. Both Euh and Lee are considered “MB men” and there was much criticism when they were appointed because of their close ties to the former president.

“What’s needed now in the financial industry is change,” said an industry official.

Ever since her inauguration, Park has been focusing on “expertise” in her appointments. She and her presidential transition team have repeatedly expressed the need to prevent “parachute appointments.”